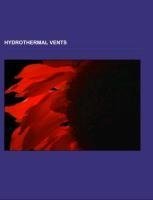 Source: Wikipedia. Pages: 25. Chapters: Eel City, Endeavour Hydrothermal Vents, Fumarole, Geyser, Halemaumau Crater, Hot spring, Hydrothermal vents and seamounts of the Azores, List of geothermal springs in the United Kingdom, Loki's Castle (hydrothermal field), Lost City (hydrothermal field), Magic Mountain (hydrothermal field), Mudpot, Mud volcano. Excerpt: A hydrothermal vent is a fissure in a planet's surface from which geothermally heated water issues. Hydrothermal vents are commonly found near volcanically active places, areas where tectonic plates are moving apart, ocean basins, and hotspots. Hydrothermal vents exist because the earth is both geologically active and has large amounts of water on its surface and within its crust. Common land types include hot springs, fumaroles and geysers. Under the sea, hydrothermal vents may form features called black smokers. Relative to the majority of the deep sea, the areas around submarine hydrothermal vents are biologically more productive, often hosting complex communities fueled by the chemicals dissolved in the vent fluids. Chemosynthetic bacteria and archaea form the base of the food chain, supporting diverse organisms, including giant tube worms, clams, limpets and shrimp. Active hydrothermal vents are believed to exist on Jupiter's moon Europa, and ancient hydrothermal vents have been speculated to exist on Mars. In this phase diagram, the green dotted line illustrates the anomalous behavior of water. The solid green line marks the melting point and the blue line the boiling point, showing how they vary with pressure.Hydrothermal vents in the deep ocean typically form along the mid-ocean ridges, such as the East Pacific Rise and the Mid-Atlantic Ridge. These are locations where two tectonic plates are diverging and new crust is being formed. The water that issues from seafloor hydrothermal vents consists mostly of sea water drawn into the hydrothermal system close to the volcanic edifice through faults and porous sediments or volcanic strata, plus some magmatic water released by the upwelling magma. In terrestrial hydrothermal systems, the majority of water circulated within the fumarole and geyser systems is meteoric water plus ground water that has percolated down into the thermal system from the surface, but it also commonly contains some portion of metamorphic wa