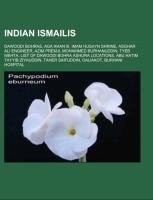 Source: Wikipedia. Pages: 30. Chapters: Dawoodi Bohras, Aga Khan III, Imam Husayn Shrine, Asghar Ali Engineer, Azim Premji, Mohammed Burhanuddin, Tyeb Mehta, List of Dawoodi Bohra Ashura locations, Abu Hatim Tayyib Ziyauddin, Taher Saifuddin, Galiakot, Burhani Hospital, Syedna Feerkhan Shujauddin, Al Jamea tus Saifiyah, Progressive Dawoodi Bohra, Saifee Hospital, Karachi, Tabular Islamic calendar, Fakhruddin T. Khorakiwala, Saifuddin Bohra, Lisan al-Dawat, Mithaq. Excerpt: Dawoodi Bohra ( Arabic/Urdu: ¿¿¿¿¿ ¿¿¿¿¿) is a subsect of Isma¿ili Shi¿a Islam. While the Dawoodi Bohra is based in India, their belief system originates in Yemen, where it evolved from the Fatimid Caliphate and they were persecuted due to their differences from main stream Sunni Islam - leading the shift of Dawoodi Bohras to India. After occultation of their 21st Imam Tayyib, they follows Dai as representative of Imam which are continued till date. The word Bohra itself comes from the Gujarati word vehwahar ( "trading"), while the term Dawoodi refers to their support for Dawood Bin Qutubshah in the 1592 Dai dispute which divided the Tayyibi sect, creating the Dawoodi Bohra. They have a very small, tight-knit community made up of approximately one million adherents worldwide, with the majority of adherents residing in India. There is also a large community in Karachi, Sindh, Pakistan, the destination of many who came as refugees in 1947 following the independence from the British Raj. In Muslim majority Pakistan, the Bohra community has been deeply influenced by orthodox Islam due to mandatory Islamic classes in schools, also due to increasing assimilation and intermarriages with other Muslims. There is also a significant diaspora population in the Middle East, Europe, North America and the Far East. Dawoodi Bohras have a blend of cultures, including Yemeni, Egyptian, African, and Indian. In addition to the local languages, the Dawoodi Bohras have their own language called Lisanu l-Da'wat ("language of the Da'wat") which is written in Perso-Arabic script and is derived from Urdu, Gujarati and Persian. The Dawoodi Bohra community is known worldwide for their various projects, including philanthropic efforts, hospitals, schools, and renovations and restorations of Islamic and Shi'a Islamic landmarks. The spiritual leader of the Dawoodi Bohra community is the Da¿i l-Mu¿laq (Arabic: ¿ "Unrestricted Missionary"), currently Mohammed Burhanuddin. The Dai serves as the eart