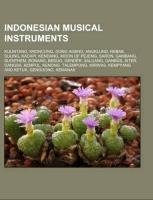 Source: Wikipedia. Pages: 27. Chapters: Kulintang, Kroncong, Gong ageng, Angklung, Rebab, Suling, Kacapi, Kendang, Moon of Pejeng, Saron, Gambang, Slenthem, Bonang, Bedug, Gendér, Saluang, Qanbus, Siter, Gangsa, Kempul, Kenong, Talempong, Mirwas, Kempyang and ketuk, Genggong, Kemanak, Kepyak, Slentho, Ugal, Kecer, Reyong, Calung. Excerpt: Kulintang is a modern term for an ancient instrumental form of music composed on a row of small, horizontally-laid gongs that function melodically, accompanied by larger, suspended gongs and drums. As part of the larger gong-chime culture of Southeast Asia, kulintang music ensembles have been playing for many centuries in regions of the Eastern Malay Archipelago - the Southern Philippines, Eastern Indonesia, Eastern Malaysia, Brunei and Timor, although this article has a focus on the Philippine Kulintang traditions of the Maranao and Maguindanao peoples in particular. Kulintang evolved from a simple native signaling tradition, and developed into its present form with the incorporation of knobbed gongs from Sunda. Its importance stems from its association with the indigenous cultures that inhabited these islands prior to the influences of Hinduism, Buddhism, Islam, Christianity or the West, making Kulintang the most developed tradition of Southeast Asian archaic gong-chime ensembles. Technically, kulintang is the Maguindanao, Ternate and Timor term for the idiophone of metal gong kettles which are laid horizontally upon a rack to create an entire kulintang set. It is played by striking the bosses of the gongs with two wooden beaters. Due to its use across a wide variety groups and languages, the kulintang is also called kolintang by the Maranao and those in Sulawesi, kulintangan, gulintangan by those in Sabah and the Sulu Archipelago and totobuang by those in central Maluku. By the twentieth century, the term kulintang had also come to denote an entire Maguindanao ensemble of five to six instruments. Traditionally the Maguindanao term for the entire ensemble is basalen or palabunibunyan, the latter term meaning "an ensemble of loud instruments" or "music-making" or in this case "music-making using a kulintang." Map of kulintang music in Southeast Asia.Kulintang belongs to the larger unit/stratum of "knobbed gong-chime culture" prevalent in Southeast Asia. It is consi