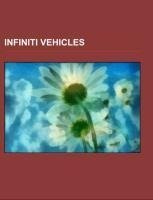 Source: Wikipedia. Pages: 28. Chapters: Infiniti Emerg-e, Infiniti Essence, Infiniti Etherea, Infiniti EX, Infiniti FX, Infiniti G, Infiniti J30, Infiniti JX, Infiniti Kuraza, Infiniti LE, Infiniti M, Infiniti Q45, Infiniti QX. Excerpt: The Infiniti G-series is a line of compact executive/entry-level luxury car produced by Nissan's luxury brand Infiniti. The first two generations of the Infiniti G (P10 and P11) were sedans based on the Nissan Primera. Beginning with its third generation (V35), the Infiniti G have been rebadged versions of the Nissan Skyline line of sedans and coupes that were exported to the United States and Canada. The current incarnation is the fourth generation (V36) which introduced the hardtop coupe convertible. The Nissan FM platform, on top of which the third and fourth generations (V35 and V36) of the Infiniti G have been built, also underpins the Nissan 370Z and has shared components with the Infiniti M, Infiniti EX, and Infiniti FX. (This section is written in a way that encompasses both generations. P10 and P11 generation information should be separated into their own section.) The Infiniti G20 was Infiniti's entry-level luxury car in the United States during most of the 1990s and into the 2000s. Similar to the Japanese/European market Nissan Primera sedan, the G20 offered higher levels of standard equipment. It was launched in 1990 as Infiniti's first small car as an entry-level alternative to the Q45; later advertisements emphasized its European heritage with the tag line "Born in Japan. Educated in Europe. Now Available in America." Two generations of the G20 exist in the United States, the HP10 (P10), built from 1990 to 1996, and the HP11 (P11), built from 1998 to 2002. All G20s were front-wheel drive and were built in Oppama, Japan. The G20 was first unveiled to Infiniti dealers at the 1989 New York International Auto Show(appearing to the public at the 1990 show), with first 1991 model being completed on July 10, 1990. The final 1996 G20 was completed on July 19, 1996. The P10 featured the first application of Nissan's multi-link front suspension in a front-wheel-drive car, with an independent MacPherson strut setup in the rear. It came standard with a 5-speed man

Was wir in der Schule lernen