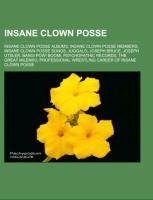 Source: Wikipedia. Pages: 51. Chapters: Insane Clown Posse albums, Insane Clown Posse members, Insane Clown Posse songs, Juggalo, Joseph Bruce, Joseph Utsler, Bang! Pow! Boom!, Psychopathic Records, The Great Milenko, Professional wrestling career of Insane Clown Posse, Carnival of Carnage, Gathering of the Juggalos, The Wraith: Shangri-La, Riddle Box, The Amazing Jeckel Brothers, Ringmaster, Dark Carnival, Miracles, Death Racers, Mike E. Clark, Chicken Huntin', Hell's Pit, Wizard of the Hood, Fuck the World, Bizzar, The Tempest, The Mighty Death Pop!, Behind the Paint, Bizaar, The Wraith: Remix Albums, Another Love Song, Party at the Top of the Hill, Hokus Pokus, Halls of Illusions. Excerpt: Insane Clown Posse is an American hip hop duo from Detroit, Michigan. The group is composed of Joseph Bruce and Joseph Utsler, who perform under the respective personas of the "wicked clowns" Violent J and Shaggy 2 Dope. Insane Clown Posse performs a style of hardcore hip hop known as horrorcore and is known for its elaborate live performances. The duo has earned two platinum and five gold albums. According to Nielsen SoundScan, the entire catalog of the group has sold 6.5 million units in the United States and Canada as of April 2007. Originally known as Inner City Posse, the group introduced supernatural- and horror-themed lyrics as a means of distinguishing itself stylistically. The duo founded the independent record label Psychopathic Records with Alex Abbiss as manager, and produced and starred in the feature films Big Money Hustlas and Big Money Rustlas. They formed their own professional wrestling federation, Juggalo Championship Wrestling, and later collaborated with many well-known hip hop and rock musicians. The group has established a dedicated following, often referred to as Juggalos. The songs of Insane Clown Posse center thematically on the mythology of the Dark Carnival, a metaphoric limbo in which the lives of the dead are judged by one of several entities. The Dark Carnival is elaborated through a series of stories called Joker's Cards, each of which offers a specific lesson designed to change the "evil ways" of listeners before "the end consumes us all." Joseph Bruce (Violent J) and Joseph Utsler (Shaggy 2 Dope) met in Oak Park, a suburb on the North border of Detroit, Michigan. Along with Utsler's brother, John, and friend, Lacy, they wrestled in backyard rings that they had built themselves. In 1989, Joseph Bruce, as Jagged Joe, Joseph Utsler, as Kangol Joe, and John Utsler, as Master J, released the single titled "Party at the Top of the Hill" under the name of JJ Boys, but the group did not pursue a serious career in music. Poverty and a diffic