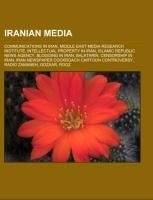 Source: Wikipedia. Pages: 32. Chapters: Communications in Iran, Middle East Media Research Institute, Intellectual property in Iran, Islamic Republic News Agency, Blogging in Iran, Balatarin, Censorship in Iran, Iran newspaper cockroach cartoon controversy, Radio Zamaneh, Gozaar, Rooz, List of newspapers in Iran, Iran-United States copyright relations, .ir, Media of Iran, Iranian Students News Agency, Iranian.com, List of Persian language television channels, Baztab, List of Persian language magazines, National Iranian Television, IranDokht, Fars News Agency, Jaam-e Jam, Iranian Labour News Agency, Tehran Times, Film, Pupils Association News Agency, Nashravaran Journalistic Institute, List of Iranian news agencies, Mehr News Agency, Iran Press Service, Fars Negar, Entekhab. Excerpt: Iran's telecommunications industry is almost entirely state-owned, dominated by the Telecommunication Company of Iran (TCI). Fixed-line penetration in 2004 was relatively well-developed by regional standards, standing at 22 lines per 100 people, higher than Egypt with 14 and Saudi Arabia with 15, although behind the UAE with 27. In terms of mobile provision in 2004, however, Iran lagged all the countries mentioned above. Iran has a population of 70 million with some 56% of Iranians under the age of 25. In 2008, there were more than 52,000 rural offices, providing Telecom services to the villages across the country. The number of fixed telephone lines is above 24 million, with penetration factor of 33.66%. Besides, there are 18 million private internet users in Iran (over 23 million when counting public/"internet cafe" users), making the country first in the Middle East, in terms of number. Iran is among the first five countries which have had a growth rate of over 20 percent and the highest level of development in telecommunication. Iran has been awarded the UNESCO special certificate for providing telecommunication services to rural areas. By the end of 2009, Iran's telecom market was the fourth-largest market in the region at $9.2 billion and is expected to grow to $12.9 billion by 2014 at a CAGR of 6.9 percent. According to the Electronic Journal on Information Systems in Developing Countries (EJISDC), the information and communications technology (ICT) sector had a 1.1-1.3% share of GDP in 2002. About 150,000 people are employed in the ICT sector, including around 20,000 in the software industry. There were 1,200 registered information technology (IT) companies in 2002, 200 of which were involved in software development. Software exports stood around $50 million in 2008. The government runs the broadcast media, which includes three national radio stations and two national television networks, as well as dozens of local radio and television stations. In 2000 ther