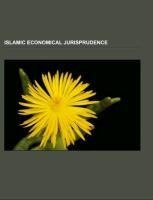 Source: Wikipedia. Pages: 40. Chapters: Islamic banking, Islamic economics in the world, Zakat, Islamic economic jurisprudence, Riba, Bayt al-mal, Sukuk, International Islamic Trade Finance Corporation- ITFC, Economy of the Organisation of the Islamic Conference, Khums, The Royal Award For Islamic Finance, Arcapita, Takaful, Islamic capitalism, Zakat al-fitr, Albaraka Türk, Islamic gold dinar, Murabaha, International Centre for Education in Islamic Finance, IdealRatings, Musharika, Islamic banking in Malaysia, Saad Al-Harran, Iqtisaduna, Nisab, Waleed Ahmad J. Addas, Banque Zitouna, World Islamic Economic Forum, Islamic Commercial Law, Makasib. Excerpt: Islamic economics in practice, or economic policies supported by self-identified Islamic groups, has varied throughout its long history. Traditional Islamic concepts having to do with economics included These concepts, like others in Islamic law and jurisprudence, came from the "prescriptions, anecdotes, examples, and words of the Prophet, all gathered together and systematized by commentators according to an inductive, casuistic method." Sometimes other sources such as al-urf, (the custom), al-aql (reason) or al-ijma (consensus of the jurists) were employed. In addition, Islamic law has developed areas of law that correspond to secular laws of contracts and torts. Some argue early Islamic theory and practice formed a "coherent" economic system with "a blueprint for a new order in society, in which all participants would be treated more fairly". Michael Bonner, for example, has written that an "economy of poverty" prevailed in Islam until the 13th and 14th centuries. Under this system God's guidance made sure the flow of money and goods was "purified" by being channeled from those who had much of it to those who had little by encouraging zakat (charity) and discouraging riba (usury/interest) on loans. Bonner maintains the prophet also helped poor traders by allowing only tents, not permanent buildings in the market of Medina, and not charging fees and rents there. Social responsibility in commerce was stressed in Islamic sociology. The development of Islamic banks and Islamic economics was a side effect of this sociology: usury was rather severely restrained, no interest rate was allowed, and investors were not permitted to escape the consequences of any failed venture-all financing was equity financing (Musharaka). In not letting borrowers bear all the risk/cost of a failure, an extreme disparity of outcomes between "partners" is thus avoided. Ultimately this serves a social harmony purpose. Muslims also could not and cannot (in shariah) finance any dealings in for