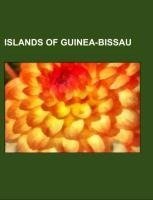 Source: Wikipedia. Pages: 27. Chapters: Bissagos Islands, Bolama, Bubaque, Carache, Caravela, Demographics of Guinea-Bissau, Economy of Guinea-Bissau, Education in Guinea-Bissau, Formosa (Guinea-Bissau), Galinhas, Geography of Guinea-Bissau, History of Guinea-Bissau, Jeta (Guinea-Bissau), João Viera, List of heads of government of Guinea-Bissau, List of heads of state of Guinea-Bissau, Orango, Orangozinho, Outline of Guinea-Bissau, Pecixe, Politics of Guinea-Bissau, Roxa, Unhacomo, Uno (Guinea-Bissau), Uracane. Excerpt: Guinea-Bissau, officially the Republic of Guinea-Bissau (Portuguese: , pronounced: ), is a country in West Africa. It is bordered by Senegal to the north and Guinea to the south and east, with the Atlantic Ocean to its west. It covers 36,125 km² (nearly 14,000 sq mi) with an estimated population of 1,600,000. Guinea-Bissau was once part of the kingdom of Gabu, as well as part of the Mali Empire. Parts of this kingdom persisted until the 18th century, while a few others were part of the Portuguese Empire since the 16th century. It then became the Portuguese colony of Portuguese Guinea in the 19th century. Upon independence, declared in 1973 and recognised in 1974, the name of its capital, Bissau, was added to the country's name to prevent confusion with the bordering Republic of Guinea. Guinea-Bissau has a history of political instability since gaining independence and no elected president has successfully served a full five-year term. On the evening of 12 April 2012, members of the country's military staged a coup and arrested the interim president and a leading presidential candidate. The military has yet to declare a current leader for the country. However, former vice chief of staff, General Mamadu Ture Kuruma has taken care of the country in the transitional period and started negotiations with opposition parties. Only 14% of the population speaks the official language, Portuguese. A plurality of the population (44%) speaks Kriol, a Portuguese-based creole language, and the remainder speak native African languages. The main religions are African traditional religions and Islam, and there is a Christian (mostly Catholic) minority. The country's per-capita gross domestic product is one of the lowest in the world. Guinea-Bissau is a member of the African Union, Economic Community of West African States, Organisation of Islamic Cooperation, the Latin Union, Community of Portuguese Language Countries, La Francophonie and the South Atlantic Peace and Cooperation Zone.