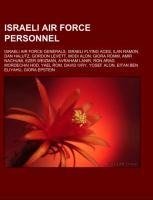 Source: Wikipedia. Pages: 25. Chapters: Israeli Air Force generals, Israeli flying aces, Ilan Ramon, Dan Halutz, Gordon Levett, Modi Alon, Giora Romm, Amir Nachumi, Ezer Weizman, Avraham Lanir, Ron Arad, Mordechai Hod, Yael Rom, David Ivry, Yosef Alon, Eitan Ben Eliyahu, Giora Epstein, Ron Huldai, Amos Lapidot, Aharon Remez, Avihu Ben-Nun, Benny Peled, Shlomo Shamir, Eliezer Shkedi, Herzl Bodinger, Ido Nehoshtan, Yoash Tzidon, Pinchas Ben-Porat, Aviem Sella, Dan Tolkovsky, Yisrael Amir, Amos Yadlin, Yaakov Turner, Rafi Peretz, Uri Gil, Bob Vickman, Iftach Spector, Roni Zuckerman. Excerpt: ·) (Hebrew: ¿) (born August 7, 1948) is an Israeli Air Force Lt. General and former Chief of Staff of the Israel Defense Forces and commander of the Israeli Air Force. Halutz was appointed as Chief of Staff on June 1, 2005. On January 17, 2007 he announced his resignation. He has a degree in economics. He was born to a Mizrahi Jewish family with origins in Iran and Iraq. Halutz joined the Israeli Air Force (IAF) in 1966 and graduated from combat flight school in 1968. In 1969 he joined the first F-4 Phantom squadron of the IAF. During the War of Attrition Halutz carried out 40 operational flights. After the war he left the IDF in order to study, but returned to active duty when the Yom Kippur War started in 1973. During the Yom Kippur War Halutz carried out over 43 operational flights in which he shot down 3 enemy planes in dogfights. In 1978 he left the IDF again and served 4 years as a reserve pilot but returned to the service in 1982 when he was also trained to pilot the new F-16 jet fighter. In 1984 he commanded a Phantom squadron. In 1986 he was appointed to head the IAI Lavi jet project. After the project was canceled due to American pressure, Halutz was appointed as commander of Hatzor airbase in 1991. In 1993 he was promoted to Brigadier General and appointed as head of air group. In 1995 he was appointed as the head of air force headquarters. In 1998 he was promoted to Major General and in 1999 he was appointed as the head of the Operations Wing in the IDF General Staff. In 2000 Halutz was appointed as the Israeli Air Force commander. He led the IAF during the Al-Aqsa Intifada, during which he was recognized by experts and subordinates as an innovative and a charismatic leader. Halutz's main reforms in the Air Force were the tightening of cooperation with the ground forces and the Shin Bet, the massive employment of UAV drones, the upgrading of precision strike capabilities in helicopter gunships and jets and the sharp decrease of accidents and aerial failu