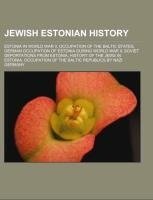 Source: Wikipedia. Pages: 26. Chapters: Estonia in World War II, Occupation of the Baltic states, German occupation of Estonia during World War II, Soviet deportations from Estonia, History of the Jews in Estonia, Occupation of the Baltic republics by Nazi Germany, Klooga concentration camp, Occupation of Estonia by the German Empire, Vaivara concentration camp. Excerpt: The ground for the fate of Estonia in World War II was laid by the German-Soviet Nonaggression Pact, particularly its Secret Additional Protocol of August 1939. The Republic of Estonia declared neutrality in the war but fell under the Soviet sphere of influence due to the Molotov-Ribbentrop Pact and was occupied by the Soviet Union in 1940. Mass political arrests, deportations, and executions followed. In the Summer War during the German Operation Barbarossa in 1941, the pro-independence Forest Brothers captured South Estonia from the NKVD and the 8th Army before the arrival of the German 18th Army. At the same time, the Soviet paramilitary destruction battalions carried out punitive operations, including looting and killing, based on the tactics of scorched earth proclaimed by Joseph Stalin. Estonia was occupied by Germany and incorporated into Reichskommissariat Ostland. In 1941, Estonians were conscripted to the 8th Estonian Rifle Corps and in 1941-1944 to the Nazi German forces. Men who avoided these mobilisations, fled to Finland to be formed as the Finnish Infantry Regiment 200. About 40% of Estonian pre war fleet were brought into requisition by the British authorities and were used in the Atlantic convoys. Approximately 1000 Estonian sailors served at the British Merchant Navy, 200 of them as officers. A small number of Estonians served in the Royal Air Force, in the British Army and in the U.S. Army. From February to September 1944, the German army detachment "Narwa" held back the Soviet Estonian Operation. After breaching the defence of II Army Corps across the Emajõgi river and clashing with the pro-independence Estonian troops, the Soviet forces reoccupied mainland Estonia in September 1944. After the war, Estonia remained incorporated into the Soviet Union as Estonian SSR until 1991. World War II losses in Estonia, estimated at around 25% of the population, were among the highest in Europe. War and occupation deaths listed in the current reports total a