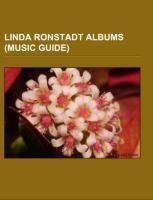 Source: Wikipedia. Commentary (music and lyrics not included). Pages: 25. Chapters: Linda Ronstadt, Stone Poneys and Friends, Vol. III, The Stone Poneys, Get Closer, Heart Like a Wheel, Evergreen, Volume 2, What's New, Don't Cry Now, Silk Purse, Simple Dreams, Trio, Cry Like a Rainstorm, Howl Like the Wind, Winter Light, Living in the USA, Hasten Down the Wind, Mas canciones, Adieu False Heart, Hummin' to Myself, Prisoner in Disguise, Canciones de mi padre, Frenesí, Western Wall: The Tucson Sessions, Trio II, Hand Sown ... Home Grown, Feels Like Home, For Sentimental Reasons, Dedicated to the One I Love, Mad Love, We Ran, Lush Life, A Merry Little Christmas. Excerpt: Linda Ronstadt, Stone Poneys and Friends, Vol. III is the third and final album by The Stone Poneys. Linda Ronstadt would release her first solo album the following year. The volume number is a reference to this being the third album by the band, though with a Roman numeral rather than the Arabic numeral used on the previous album. While all three bandmembers are shown on the covers of the first two albums, only Linda Ronstadt appears on the front cover of this album, while the back cover photo depicts a large group of people surrounding Ronstadt in front of a house in Tucson, Arizona. As on the second album (though with a few exceptions in that case), Linda Ronstadt sings lead vocals on all tracks. While ostensibly a Stone Poneys album, Vol. III represents a transition between the work of this band and Linda Ronstadt's solo career. Many of the songs are in more of a country-rock style that would mark her most popular work in later years, rather than the folk-rock music of the first two Stone Poneys albums. This is particularly true of the two songs that were released as singles from this album, "Some of Shelly's Blues" and "Up to My Neck in High Muddy Water"; the latter song reached #93 on the Billboard Hot 100 singles chart. The album was released in April 1968 in the LP format by Capitol in both monaural and stereophonic editions (catalogue numbers T 2863 and ST 2863, respectively). In 1995, Capitol reissued the album on CD (catalogue number 80130). In 2008 - 40 years after this album was released - Raven issued a 27-track "two-fer" CD simply called The Stone Poneys, featuring all tracks from the first two albums by the Stone Poneys, The Stone Poneys and Evergreen, Volume 2, plus four tracks from this album: "Hobo", "Up to My Neck in High Muddy Water", "Some of Shelly's Blues" and "Stoney End". Unlike the first two albums, when they composed most of the songs, the other bandmembers, Bobby Kimmel and Kenny Edwards were the songwriters on only two of the songs. (In