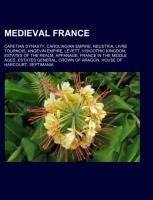 Source: Wikipedia. Pages: 100. Chapters: Capetian dynasty, Carolingian Empire, Neustria, Livre tournois, Angevin Empire, Levett, Visigothic Kingdom, Estates of the realm, Appanage, France in the Middle Ages, Estates General, Crown of Aragon, House of Harcourt, Septimania, Tour de Nesle Affair, First Barons' War, Parlement, Cagot, County of Burgundy, County of Montbéliard, Quatre-Vallées, Principality of Orange, Septimania timeline, Constable of France, Auld Alliance, West Francia, Burgundian Wars, Nébouzan, University of Paris strike of 1229, Kingdom of Arles, Aragonese Crusade, List of Carolingian monasteries, Quercy, List of counts of Mâcon, Edict of Pistres, Prince of Gothia, War of the Succession of Flanders and Hainault, Cutting of the elm, Edict of Paris, Feast of the Pheasant, Sire de Bourbon, Treaty of Corbeil, Crépy-en-Valois, Treaty of Arras, Battle of Amblève, Vase of Soissons, Comminges, Roquefeuil Versols, Charte d'Alaon, Battle of Vézeronce, Treaty of Anagni, Seneschal of Anjou, Luparii, Circulade, Synod of Thionville, Capetian Miracle, Gesta Normannorum Ducum, Roi fainéant, Aubaine, Fisc, Duke of the Franks, French sol, Confrères de la Paix, Duke of France. Excerpt: The term Angevin Empire is a modern term describing the collection of states once ruled by the Angevin Plantagenet dynasty. The Plantagenets ruled over an area stretching from the Pyrenees to Ireland during the 12th and early 13th centuries. This "empire" extended over roughly half of medieval France, all of England, and some of Ireland. However, despite the extent of Plantagenet rule, they were defeated by the King of France, Philip II Augustus of the House of Capet, which left the empire split in two, having lost the provinces of Normandy and Anjou. This defeat, after which the ruling Plantagenets retained their English territories and the French province of Gascony, set the scene for the Saintonge and the Hundred Years' War. The Angevin Empire is a neologism defining the lands of the Plantagenets: Henry II and his sons Richard I and John. Another son Geoffrey II, Duke of Brittany ruled Brittany and established a separate line there. As far as historians know, there was no contemporary term for the region under Angevin control; however descriptions such as "our kingdom and everything subject to our rule whatever it may be" were used. The term Angevin Empire was coined by Kate Norgate in her 1887 publication, England under the Angevin Kings. In France, the term Espace Plantagenêt (Plantagenet Area) is sometimes used to describe the fiefdoms the Plantagenets had acquired. The adoption of the Angevin Empire label marked a re-evaluation of the times, considering that both English and French influence spread throughout the dominion in the half century during which the union lasted. The term Angevin itself is the adjective applied to the residents of Anjou and its historic capital, Angers; the Plantagenets were descended from Geoffrey, Count of Anjou, hence the term. The use of the term Empire has raised controversy among some historians, as the area was a collection of the lands inherited and acquired by Henry. It is unclear whether or not these dominions shared any co