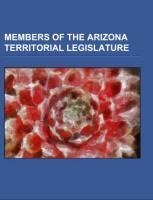 Members of the Arizona Territorial Legislature

Source: Wikipedia. Pages: 38. Chapters: Albert C. Baker, Andrew Kimball, C. Meyer Zulick, Clay Beauford, David King Udall, DeForest Porter, Don Lorenzo Hubbell, Edmund W. Wells, Estevan Ochoa, Fred G. Hughes, George W. P. Hunt, Granville Henderson Oury, Harley High Cartter, Henry F. Ashurst, Jesse N. Smith, John G. Campbell, John J. Hawkins, John T. Alsap, Joseph Henry Kibbey, King Woolsey, Mark Aldrich, Peter Rainsford Brady, Pie Allen, Richard Elihu Sloan, Thomas Edward Campbell, Thomas Fitch (politician), William Neville. Excerpt: Thomas Fitch (January 27, 1838 - November 12, 1923) was an American lawyer and politician. He defended President Brigham Young of The Church of Jesus Christ of Latter-day Saints and other church leaders when Young and his denomination were prosecuted for polygamy in 1871 and 1872. He also successfully defended Virgil, Morgan, and Wyatt Earp along with Doc Holliday when they were accused of murdering Billy Clanton, and Tom and Frank McLaury during the October 25, 1881 Gunfight at the O.K. Corral. Fitch wrote for and edited a number of newspapers during his life and served in multiple political offices. He was a stout Republican and campaigned for Abraham Lincoln across Nevada. He developed a reputation as a capable lawyer and a terrific speaker and was nicknamed the "silver-tongued orator of the Pacific." He was a member of the California State Assembly in 1862 and 1863. In 1864, he was living in Virginia City, Nevada, where he edited the Virginia Daily Union. He became friends with Mark Twain who credited him with improving his writing. Fitch was a delegate to the Nevada state constitutional convention and also served as a member of the Utah state constitutional convention. He was a member of the Arizona Territorial Legislature in 1879. He witnessed the laying of the first rail at the western terminus of the Overland Route in Sacramento and the last one at Promontory Point in Utah. He practiced law, mostly in Nevada, Utah, and Arizona, moving frequently during his life among these states. He also briefly practiced law in Minnesota and New York. According to one obituary he was one of "the three great orators who kept California loyal to the Union during the Civil War". Fitch was born in New York City on January 27, 1838. His father was a merchant and he attended public schools. His family had lived in New England for six or seven generations. One of his ancestors, Sir Thomas Fitch, was Governor of Connecticut when it was a colony. At age ten years he "made the strug