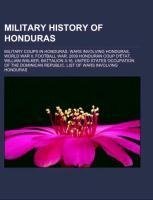 Source: Wikipedia. Pages: 31. Chapters: Military coups in Honduras, Wars involving Honduras, World War II, Football War, 2009 Honduran coup d'état, William Walker, Battalion 3-16, United States occupation of the Dominican Republic, List of wars involving Honduras, 1975 Honduran coup d'état, 1963 Honduran coup d'état. Excerpt: World War II, or the Second World War (often abbreviated as WWII or WW2), was a global military conflict lasting from 1939 to 1945, which involved most of the world's nations, including all of the great powers: eventually forming two opposing military alliances, the Allies and the Axis. It was the most widespread war in history, with more than 100 million military personnel mobilised. In a state of "total war," the major participants placed their entire economic, industrial, and scientific capabilities at the service of the war effort, erasing the distinction between civilian and military resources. Marked by significant events involving the mass death of civilians, including the Holocaust and the only use of nuclear weapons in warfare, it was the deadliest conflict in human history, resulting in 50 million to over 70 million fatalities. The war is generally accepted to have begun on 1 September 1939, with the invasion of Poland by Germany and Slovakia, and subsequent declarations of war on Germany by France and most of the countries of the British Empire and Commonwealth. Germany set out to establish a large empire in Europe. From late 1939 to early 1941, in a series of campaigns and treaties, Germany conquered or subdued much of continental Europe; amid Nazi-Soviet agreements, the nominally neutral Soviet Union fully or partially occupied and annexed territories of its six European neighbours. Britain and the Commonwealth remained the only major force continuing the fight against the Axis in North Africa and in extensive naval warfare. In June 1941, the European Axis launched an invasion of the Soviet Union, giving a start to the largest land theatre of war in history, which, from this moment on, was tying down the major part of the Axis military power. In December 1941, Japan, which had been at war with China since 1937, and aimed to dominate Asia, attacked the United States and European possessions in the Pacific Ocean, quickly conquering much of the region. The