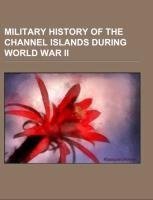 Military history of the Channel Islands during World War II

Source: Wikipedia. Pages: 24. Chapters: Battery Lothringen, Granville Raid, Hohlgangsanlage 8, Hohlgangsanlage tunnels, Jersey, Island at War, Occupation of the Channel Islands, Operation Accumulator, Operation Ambassador, Operation Basalt. Excerpt: Island at War is a British television series that tells the story of the German Occupation of the Channel Islands. It primarily focuses on three local families: the upper class Dorrs, the middle class Mahys and the working class Jonases, and four German officers. The fictional island of St. Gregory serves as a stand-in for the real-life islands Jersey and Guernsey, and the story is compiled from the events on both islands. Produced by Granada Television in Manchester, Island at War had an estimated budget of £9,000,000 and was filmed on location in the Isle of Man from August 2003 to October 2003. When the series was shown in the UK, it appeared in six 70-minute episodes. James Dorr is a member of the St. Gregory Senate, and is deputy bailiff of the island's government. His family is well-known and respected; both his father and grandfather have served as Bailiff. He loves his wife Felicity, but cannot be sure she loves him and often finds that she gets in his way. He sent his son Phillip to England to go to boarding school, something that Felicity never quite forgave him for. James takes his job in the Senate very seriously, and works hard to ensure that the transition into occupation is as painless as possible for his fellow islanders. He knows full well that the Germans are capable of killing every person on St. Gregory, and encourages his friends and family to avoid stirring up the waters for fear of German retaliation. He is suspicious of his wife's relationship with Baron Von Rheingarten, and doesn't trust either of them completely. When Phillip and La Salle arrive on St. Gregory to gather information, James worries that their presence may invite resistance; his sense of duty to St. Gregory tends to cloud his judgment. James Dorr was played by James Wilby. Felicity is James Dorr's wife. Not a native of St. Gregory, she was born and educated in England, where she met James. She and James conceived a child the night they met, and were married very quickly afterw