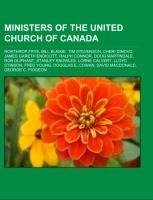 Ministers of the United Church of Canada

Source: Wikipedia. Pages: 26. Chapters: Northrop Frye, Bill Blaikie, Tim Stevenson, Cheri DiNovo, James Gareth Endicott, Ralph Connor, Doug Martindale, Rob Oliphant, Stanley Knowles, Lorne Calvert, Lloyd Stinson, Fred Young, Douglas E. Cowan, David MacDonald, George C. Pidgeon, Donald D. Evans, Jack Shaver, Lois Miriam Wilson, James Manly, Robert Balgarnie Young Scott, William Martin, Bill Ferrier, Jack Burghardt, Lorne Pierce, Rosemary Godin, J. King Gordon, Gary Burrill, William MacDougall, Doug Lauchlan, Arthur B. B. Moore, Lester Burry, Douglas I. Cosman, Philip Mayfield, Norman Rawson. Excerpt: William Alexander "Bill" Blaikie, PC (born June 19, 1951) is a Canadian politician. He has been a member of the Legislative Assembly of Manitoba since April 2009, representing the Winnipeg division of Elmwood as a member of the New Democratic Party of Manitoba, and Minister of Conservation and Government House Leader since November 2009. He was previously a Member of Parliament (MP) from 1979 to 2008, representing Elmwood-Transcona and its antecedent ridings in the Canadian House of Commons for the federal New Democratic Party. Blaikie had the longest continuous parliamentary record in the 39th Canadian parliament, and in this capacity served as the Dean of the House. He is a member of the Queen's Privy Council for Canada and has the right to be styled the Honourable for life. Blaikie was the Deputy Speaker of the Canadian House of Commons from 2006 to 2008. He has announced that he will not be a candidate in the October 2011 provincial election and will be retiring from political life. Blaikie was born to a working-class family in Winnipeg, Manitoba. His father was employed by Canadian National for over forty years, at first as a machinist and later in management. Blaikie served in The Queen's Own Cameron Highlanders of Canada from 1967 to 1972, and was a labourer on and off with the Canadian National Railway from 1969 to 1974 while attending University. He was a member of the Young Progressive Conservatives in high school, and joined the NDP in 1971. Blaikie has a Bachelor of Arts degree in Philosophy and Religious Studies from the University of Winnipeg (1973), and a Master of Divinity from Emmanuel College, Toronto School of Theology (1977). He was ordained as a minister in the United Church of Canada on June 4, 1978, and subsequently became a politician in the social gospel tradition of such figures as J.S. Woodsworth, Tommy Douglas and Stanley Knowles. From 1977 to 1979, he worked for the United Church's inner-city Stella Project in north-end Winnipeg. The New