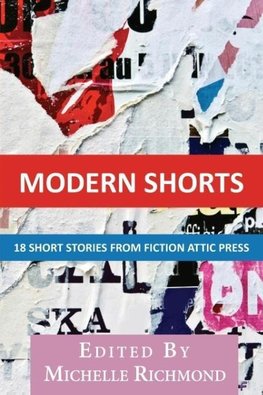 Modern Shorts: 18 Short Stories From Fiction Attic Press, features the winners of the Fiction Attic Press Short Fiction Contest. A diverse collection of thought-provoking, beautifully written stories by emerging and established writers, recommended for writers of short fiction, students of contemporary fiction, and anyone who loves a good story. With its emphasis on emerging authors and its diversity of subject and style, Modern Shorts is also a valuable resource for fiction writing workshops.

In Neil Mathison's "The Cannery," an outdoorsman in Alaska becomes the platonic companion of a young movie star, a woman who has briefly escaped the confines of Hollywood to read scripts in the far North. In "When You're Flying High, You'd Better Not Look Down," the narrator takes a trip on Route 66 in the wrong direction, irreverently channeling Thelma and Louise. In Linda Boroff's "Home Like a Shadow," a college student accompanies her well-spoken boyfriend on a trip to his derelict hometown, where she encounters the ugly reality of his alcoholic family.

Timothy Boudreau exposes the underbelly of small-town life in "The Charm." The struggle between belief and science is explored with grace and insight in "Godforsaken Stone Gilbert," D.R.D. Bruton's tale of a bookishly inclined working man who is faced with the realization that he may never see his dead daughter in the afterlife. "Indian Classroom," by Darlene P. Campos, is a love story set at the Flandreau Indian Boarding School at a time in the not-too-distant past.

"The Red Ball," J.S. Kierland's story of two women who meet in New York City decades after they stood on opposite sides of a barbed wire fence at a concentration camp, ponders whether forgiveness is possible.

Christopher David DiCicco's "Beer of the Month" is an epistolary tale that begins with beer and ends, as all good stories do, in an entirely unexpected place.

Family is the subject of "The Chef," by Jen Knox, "The Neighbors," by Claire E. Lombardo, "Running," by John P. Loonam, and "It'll Be All Right," by Jackie Davis Martin. In "The Chef," two young siblings bond over their father's absence, making their own precarious way in the world, until the brother leaves for California. In "The Neighbors," a 13-year-old girl becomes the silent bearer of all of the neighborhood secrets while babysitting the children of families much wealthier than her own. "Running" begins with a car crash and ends with a quiet but effective act of revenge. In "It'll Be All Right," Jackie Davis Martin focuses on the distance between a woman and her adult daughter.

"Little Big Death," by Mark Pritchard, is the chilling dystopian tale of a man who, faced with the prospect of living out the rest of his days in a world in chaos, chooses to end his life in an orgiastic party, courtesy of the drug Superdeath-only to discover that the government's program to provide citizens with an easy way out is not foolproof.

Suzanne Samples turns her attention to death as well in "Chekhov's Toothbrush," in which a woman who doesn't quite have her act together discovers a suicide note written by her well-adjusted, better-looking younger sister. In "Slivers of Smoke," by JLSchneider, the Beamstrous family's seemingly innocuous camping trip is revealed to be the product of ulterior motives. In "The Hand," by Thom Shwarz, a man who has been a failure as a husband watches as his wife of many years is swept away in a flood.

The anthology ends with Owen Thomas's "Everything Stops," the story of a man who has spent a great many years lying to himself finally looking both inward and outward, into the impossibly vast heavens, at the stars whose stories were written long before

Tell Me a Secret