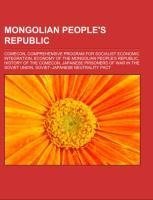 Source: Wikipedia. Pages: 30. Chapters: Comecon, Comprehensive Program for Socialist Economic Integration, Economy of the Mongolian People's Republic, History of the Comecon, Japanese prisoners of war in the Soviet Union, Soviet-Japanese Neutrality Pact, International relations within the Comecon, Mongolian People's Army, Structure of the Comecon, 1932 armed uprising in Mongolia, Net material product, Stalinist repressions in Mongolia, Negdel, Molotov Plan, United Nations Security Council Resolution 166. Excerpt: The Council for Mutual Economic Assistance (Russian: , Sovet ekonomicheskoy vsaymopomoshchi, , SEV, English abbreviation COMECON, CMEA, or CAME), 1949-1991, was an economic organisation under hegemony of Soviet Union comprising the countries of the Eastern Bloc along with a number of communist states elsewhere in the world. The Comecon was the Eastern Bloc's reply to the formation of the Organization for European Economic Co-operation in western Europe. The descriptive term was often applied to all multilateral activities involving members of the organization, rather than being restricted to the direct functions of Comecon and its organs. This usage was sometimes extended as well to bilateral relations among members, because in the system of socialist international economic relations, multilateral accords-typically of a general nature-tended to be implemented through a set of more detailed, bilateral agreements. An East German stamp celebrating the 40th anniversary of Comecon Map of Comecon member states as of November 1986.Key: January 1949: February 1949: 1950: 1962: 1972: 1978: Source: 1973: 1975: 1975: 1984: 1985: In the late 1950s, a number of communist-ruled non-member countries-People's Republic of China, the Democratic People's Republic of Korea (North Korea), Mongolia, Vietnam, and Yugoslavia-were invited to participate as observers in Comecon sessions. Although Mongolia and Vietnam later gained full membership, China stopped attending Comecon sessions after 1961. Yugoslavia negotiated a form of associate status in the organization, specified in its 1964 agreement with Comecon. Collectively, the members of the Comecon did not display the necessary prerequsites for economic integration: their level of industrialization was low and uneven, with a single dominant member (the Soviet Union) producing 70% of the community national product. In the late 1980s there were ten full members: the Soviet Union, six East European countries, and three extraregional members