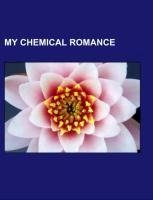 Source: Wikipedia. Pages: 33. Chapters: My Chemical Romance albums, My Chemical Romance members, My Chemical Romance songs, My Chemical Romance video albums, The Black Parade (rock opera), Desolation Row, Under Pressure, Danger Days: The True Lives of the Fabulous Killjoys, My Chemical Romance discography, The Black Parade World Tour, Gerard Way, The World Contamination Tour, Three Cheers for Sweet Revenge, Frank Iero, Na Na Na, The Black Parade Is Dead!, Famous Last Words, Welcome to the Black Parade, Teenagers, Sing, I Brought You My Bullets, You Brought Me Your Love, The Ghost of You, Helena, Life on the Murder Scene, I'm Not Okay, I Don't Love You, James Jean, The Mad Gear and Missile Kid, Honey, This Mirror Isn't Big Enough for the Two of Us, Live and Rare, Planetary, Headfirst for Halos, Thank You for the Venom, Vampires Will Never Hurt You, AOL Sessions, The Black Parade: The B-Sides, ¡Venganza!, Warped Tour Bootleg Series, Like Phantoms, Forever, Dreams of Stabbing and/or Being Stabbed. Excerpt: My Chemical Romance is an American rock band from New Jersey, formed in 2001. The band consists of lead vocalist Gerard Way, guitarists Ray Toro and Frank Iero, and bassist Mikey Way and have a diverse sound incorporating elements of gothic rock, punk, heavy metal, glam rock and metal, and progressive rock. Shortly after forming, the band signed to Eyeball Records and released their debut album I Brought You My Bullets, You Brought Me Your Love in 2002. They signed with Reprise Records the next year and released their major label debut Three Cheers for Sweet Revenge in 2004; the album was a commercial success, and was awarded platinum status a little over a year later. The band eclipsed their previous success with their 2006 concept album, The Black Parade, which gained generally favorable reviews among music critics. Their fourth studio album, Danger Days: The True Lives of the Fabulous Killjoys, was released on November 22, 2010, to positive reviews. The band was formed by frontman Gerard Way and drummer Matt Pelissier approximately one week after the September 11 attacks. Witnessing the planes crash into the World Trade Center influenced Way's life to the extent that he decided to start a band. Way wrote the song "Skylines and Turnstiles" to express his feelings about September 11 and shortly thereafter, Ray Toro was recruited because at the time Way couldn't sing and play the guitar at the same time. The name of the band was suggested by bass guitarist Mikey Way, younger brother of Gerard, who was working in a library when he was struck by the title of a book by Irvine Welsh named Ecstasy: Three Tales of Chemical Romance. The first recording sessions were undertaken in Pelissier's attic, where the songs "Our Lady of Sorrows" (formerly called "Bring More Knives") and "Cubicles" were recorded. The band refers to those sessions as The Attic Demos. After hearing the demo, Mikey Way decided to join the band after dropping out of college. While with Eyeball Records, t