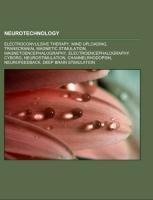 Source: Wikipedia. Pages: 74. Chapters: Electroconvulsive therapy, Mind uploading, Transcranial magnetic stimulation, Magnetoencephalography, Electroencephalography, Cyborg, Neurostimulation, Channelrhodopsin, Neurofeedback, Deep brain stimulation, Transcutaneous electrical nerve stimulation, Electrocorticography, Vagus nerve stimulation, Electromyography, Spinal cord stimulator, Cranial electrotherapy stimulation, Pulsed Electromagnetic Field Therapy, Brainwave entrainment, Sacral nerve stimulation, Brain-reading, Facial electromyography, Intracranial EEG, Rebox electrotherapy, International Neuromodulation Society, Electrooculography, Transcranial alternating current stimulation, Phi complex, Comparison of neurofeedback software, Phonomyography, Neurohacking, SyNAPSE, OpenVibe, PsychoPy, RNS System, European Data Format, Neurotechnology Industry Organization, Multiscale Electrophysiology Format, Hemoencephalography, Psychtoolbox for MATLAB, Electromyoneurography, Electro stimulation. Excerpt: Electroconvulsive therapy (ECT), formerly known as electroshock, is a psychiatric treatment in which seizures are electrically induced in anesthetized patients for therapeutic effect. Its mode of action is unknown. Today, ECT is most often recommended for use as a treatment for severe depression which has not responded to other treatment, and is also used in the treatment of mania and catatonia. It was first introduced in 1938 by Italian neuropsychiatrists Ugo Cerletti and Lucio Bini, and gained widespread use as a form of treatment in the 1940s and 1950s. Electroconvulsive therapy can differ in its application in three ways: electrode placement, frequency of treatments, and the electrical waveform of the stimulus. These three forms of application have significant differences in both adverse side effects and positive outcomes. After treatment, drug therapy is usually continued, and some patients receive continuation/maintenance ECT. In the United Kingdom and Ireland, drug therapy is continued during ECT. Informed consent is a standard of modern electroconvulsive therapy. According to the Surgeon General, involuntary treatment is uncommon in the United States and is typically only used in cases of great extremity, and only when all other treatment options have been exhausted and the use of ECT is believed to be a potentially life saving treatment. However, caution must be exercised in interpreting this assertion as, in an American context, there does not appear to have been any attempt to survey at national level the usage of ECT as either an elective or involuntary procedure in almost twenty years. In one of the few jurisdictions where recent statistics on ECT usage are available, a national audit of ECT by the Scottish ECT Accreditation Network indicated that 77% of patients who received the treatment in 2008 were capable of giving informed consent. Despite the fact that the majority of psychiatric clinicians regard ECT as a safe and effective procedure, surveys of