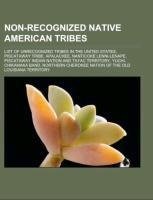 Source: Wikipedia. Pages: 29. Chapters: List of unrecognized tribes in the United States, Piscataway tribe, Apalachee, Nanticoke Lenni-Lenape, Piscataway Indian Nation and Tayac Territory, Yuchi, Chikamaka Band, Northern Cherokee Nation of the Old Louisiana Territory, Choctaw Nation Mississippi River Clan, Nipmuc Nation, Algonquian Confederacy of the Quinnipiac Tribal Council, Ani-Stohini/Unami, Verona Band of Alameda County, Kaweah Indian Nation, Tsnungwe. Excerpt: Connection Timeout The Piscataway are subtribe of the Conoy Native American tribe of Maryland. At one time, they were one of the most populous and powerful Native polities of the Chesapeake Bay region. They spoke Algonquian Piscataway, a dialect of Nanticoke. Today three groups represent Piscatawy descendents, the Piscataway Indian Nation and Tayac Territory, the Piscataway Conoy Tribe of Maryland, and the Cedarville Band of Piscataway Indians. They are all located in Southern Maryland, and none has state or federal recognition. The Piscataway are also known as the Pascatowies, Paschatoway, Pazaticans, Pascoticons, Paskattaway, Pascatacon, Piscattaway, and Puscattawy. The Piscataway language was part of the Algonquian language family. A Jesuit mission compiled Piscataway language materials in the early 17th century, and Father Andrew White wrote the Catechism in Piscataway in 1610. The Piscataway were settled on the north bank of Potomac River in what is now Prince George's County, Maryland, according to John Smith's 1608 map. Their settlements appear in that same area on maps through 1700. The Piscataway independently inhabit part of their traditional homelands on the Western Shore of Maryland's Chesapeake Bay in the areas of Charles County, Prince George's County, and St. Mary's County, located near two metropolitan areas, Baltimore and Washington, D.C. None of the tribes has a reservation. The Piscataway relied more on agriculture than many of their neighbors, and they grew crops such as corn, beans, and pumpkins. Men hunted bears, deer, squirrels, partridges, wild turkeys, and other small game with bows and arrows. Fishing, gathering oysters, and harvesting nuts supplemented their diets. Piscataway villages were company and protected by palisades. Traditional houses were rectangular and typically 10 feet high and 20 feet long, with barrel-shaped roofs, covered with bark or woven mats. A hearth occupied the center of the house with a smoke hole overhead. Some arc