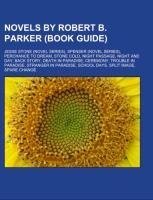 Source: Wikipedia. Commentary (novels not included). Pages: 27. Chapters: Jesse Stone (novel series), Spenser (novel series), Perchance to Dream, Stone Cold, Night Passage, Night and Day, Back Story, Death in Paradise, Ceremony, Trouble in Paradise, Stranger in Paradise, School Days, Split Image, Spare Change, High Profile, Chasing the Bear, The Judas Goat, Sea Change, Blue Screen, Poodle Springs, The Godwulf Manuscript, A Catskill Eagle, Potshot, Small Vices, Thin Air, Hundred-Dollar Baby, Bad Business, Early Autumn, Mortal Stakes, Pastime, Walking Shadow, God Save the Child, Promised Land, Looking for Rachel Wallace, Pale Kings and Princes, Love and Glory, Paper Doll, Double Deuce, Crimson Joy, The Boxer and the Spy, Widow's Walk. Excerpt: Perchance to Dream is a detective crime novel by Robert B. Parker, written as an authorized sequel to The Big Sleep by Raymond Chandler. Following his post-mortem collaboration with Chandler on Poodle Springs, this 1991 release is the second and final Philip Marlowe novel written by Parker. Set a few years after the events of The Big Sleep, the new novel begins with long passages of text lifted from the original to set the scene, establish the characters, and remind readers of the events of the first book. The story is set in motion by the death of family patriarch General Sternwood. Marlowe is called to the Sternwood mansion in the hills of Los Angeles by Norris, the butler. He finds older daughter Vivian still in residence and still dating gangster Eddie Mars but her younger sister Carmen, still tormented by the events of the original story, has been sent off to live at Resthaven, a luxurious psychiatric rehabilitation facility. When Carmen disappears from the rest home, Norris hires Marlowe to find her. The estate of Raymond Chandler was satisfied with Parker's completion of Poodle Springs, a Philip Marlowe novel begun in 1958 by Chandler but finished by Parker for publication in 1989. They authorized him to write this entirely new sequel to the first Marlowe novel, The Big Sleep, originally published in 1939. Parker, a longtime fan and student of Chandler's writing, said he took the assignment because "I wanted to see if I could do it". After the publication of Perchance to Dream, Parker announced that this would be his final Marlowe novel because he did not "want to spend life writing some other guy's books". Perchance to Dream is written as a direct sequel to The Big Sleep, the title of which is a euphemism for death. (The older novel includes a philosophical reflection on "sleeping the big sleep".) Continuing the play on words, the sequel derives its name from famous lines from Prince Hamlet's soliloquy in Hamlet, a tragedy by William Shakespeare: "to die: to