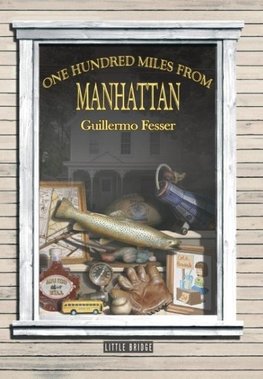 One Hundred Miles from Manhattan

In 2002 Guillermo Fesser quit his morning radio talk show in Madrid, and moved with his family to Rhinebeck, N.Y., for a sabbatical year. Finding himself in a rural community 6,000 miles from home and 100 miles from New York City, Fesser began to discover... Viac o knihe

In 2002 Guillermo Fesser quit his morning radio talk show in Madrid, and moved with his family to Rhinebeck, N.Y., for a sabbatical year. Finding himself in a rural community 6,000 miles from home and 100 miles from New York City, Fesser began to discover an America he had never imagined existed.

One Hundred Miles from Manhattan is a fresh, funny, positive and affectionate portrait of life in small-town America-and beyond. This book is filled with the stories of the people Fesser met, the places he visited and the things he learned during his year in Rhinebeck. From the German neighbors who welcome in the New Year by jumping back and forth from the couch to the coffee table to a Texan rancher who follows Native American traditions in the raising of bison. From a guide who leads fishing expeditions into Alaska's Kuskokwim Mountains to the engineer responsible for the steam conduction system in Manhattan's underbelly. And from a former follower of Reverend Moon-turned-track coach to the man who created Big Bird.

"One Hundred Miles from Manhattan is a book that Jon Stewart should have written. But he couldn't have since he rarely leaves Manhattan. Thankfully Guillermo Fesser did. This famous Spanish wit dispels pre-conceived notions about America by using good old wanderlust and fresh eyes to document what a rich country we are. Not materially; but in spirit, history and character. Guillermo should sit back down and try his hand at the great American novel."-Bill Owens, Executive Editor, 60 Minutes, CBS

"Fesser looks at daily life through a unique lens. One Hundred Miles from Manhattan is wacky, funny and full of characters I would like to meet. Bravo!" -Pedro Almodóvar, Filmmaker

"...With fast-paced and witty storytelling, going well beyond the stereotypes and clichés we are so used to hearing about America, Fesser captures the true essence of this country and its people, their vast cultural wealth and exhilarating complexity." -Juan Manuel Benítez, Anchor, NY1, New York City

"... As he struggled to reconcile what he learned from the people he met with his preconceptions about the U.S., their tales became fodder for a bestseller in Spain: A Cien Millas de Manhattan. ... Now the book has just been translated into English, giving Guillermo a crack at surprising you about a place you know. You should let him." -Nick Leiber, Editor, Bloomberg Businessweek, New York City

About the author: Guillermo Fesser is a Spanish journalist mostly known in his country for his innovative morning radio talk show, Gomaespuma , which ran 25 years and had over 1 million listeners.

Fesser studied journalism at the Universidad Complutense of Madrid and filmmaking at the University of Southern California, Los Angeles via a Fulbright scholarship. He has written and directed films; edited and hosted television news programs; and published articles in the major Spanish newspapers El Pais and El Mundo.

Fesser lives with his family in Rhinebeck, New York, where he broadcasts weekly stories on life in small-town America to Onda Cero Radio in Spain and blogs for The Huffington Post.