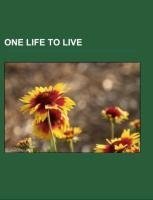 One Life to Live

Source: Wikipedia. Pages: 41. Chapters: Llanview, Todd Manning and Marty Saybrooke rape storylines, One Life to Live storylines, Mendorra, List of One Life to Live cast members, List of One Life to Live crew. Excerpt: Llanview, Pennsylvania is the fictional setting for the long-running American soap opera One Life to Live. The city exists in the same fictional universe as cities from other existing or defunct ABC daytime dramas, including Pine Valley from All My Children, Port Charles from General Hospital, and Corinth from Loving. The community is supposedly a suburb of Philadelphia, modeled after the actual Chestnut Hill section of the city, though the name Llanview suggests an inspiration closer to the Welsh settlements of Upper Merion Township and Lower Merion Township north west of Philadelphia, Pennsylvania. The name Llanview is a conjunction of Welsh llan (Church parish enclosure) with English -view, for a meaning of Parish-view or View of the Church Parish. Other in-universe locations, such as the Lord estate of Llanfair (-fair is a Welsh corruption of Mair for the name Mary, with Llanfair meaning Mary's Church), suggest a Welsh historical element. It has yet to be revealed if Llanview the town overlooked Llanfair the estate. It is said to be the county seat of Llantano County and located on the Llantano River, across from All My Children's Pine Valley. In the fictional universe, the mayor of the town is Llanview physician Dorian Lord. Llanview is the home of Llanview University and conglomerate Buchanan Enterprises. The local newspaper is The Banner, run by newspaper tycoon Victoria Lord. The Banner's rival publication is The Sun, which is run by Viki's half-brother Todd Manning. Llanview Hospital is the local medical center, and Angel Square is a central area located in East Llanview. Bo Buchanan is appointed Llanview Police Commissioner in 1995; his nemesis corrupt Mayor Stanley Lowell, replaces Bo in 2010. Bo is reinstated, but in 2010 Dorian Lord is blackmailed into replacing Bo with Lowell himself. Bo's wife Nora Hanen is District Attorney. Former Llanview high school teacher Marcie McBain is the best-selling author of The Killing Club, a mystery novel. On July 29,