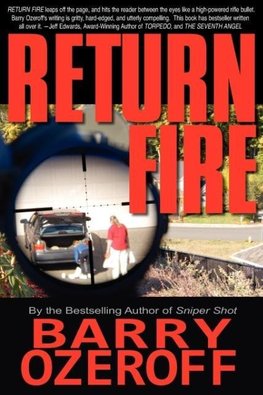 "RETURN FIRE leaps off the page, and hits the reader between the eyes like a high-powered rifle bullet. Barry Ozeroff's writing is gritty, hard-edged, and utterly compelling.
This book has bestseller written all over it."
... Viac o knihe

"RETURN FIRE leaps off the page, and hits the reader between the eyes like a high-powered rifle bullet. Barry Ozeroff's writing is gritty, hard-edged, and utterly compelling.
This book has bestseller written all over it."
-Jeff Edwards, award-winning author of SEA¿OF¿SHADOWS and THE SEVENTH ANGEL

"Charged with adrenaline, RETURN FIRE is a high-speed police thriller that never lets you off the edge of your seat. Equal parts mystery and action thriller, RETURN FIRE is page-turning fiction at its very best."
-the American Author's Association

RETURN FIRE details the disturbingly realistic processes of a police sniper under intense pressure. It has enough action, sex, and violence to satisfy the most avid adrenaline junkie."
-Lisa Black, author of TAKEOVER

As a decorated SWAT sniper, Barry Ozeroff's aim as a storyteller is just as deadly accurate. RETURN FIRE is everything you could ever want in a thriller.
-Steve Hamilton, Edgar Award-winning author of NIGHT¿WORK.

SWAT sniper Ben Geller and his family have a lot on their plate. They were victims of a recent hostage siege, their debts far outweigh their earnings, and they're trying to adopt a troubled young African-American boy. So the last thing they need is to be stalked by a madman with a grudge, a creative imagination, and fifteen million dollars.

Ben has other problems as well. Of the three ladies in his life, the only faithful one is his eight-year-old daughter. The other two-the wife he thought he knew, and the badge-wielding girlfriend who's maybe just a little too possessive-are both full of surprises. When the stress gets to him, and his job is threatened by an excessive force complaint, Ben realizes he's lost all control of his life.

Then things begin to change for the better, leaving Ben back in full control. But better isn't always what it's cracked up to be, and control isn't just something Ben's lost, it's something he never had.

And now, in RETURN¿FIRE, Ozeroff fans get the payoff they've been waiting for.

Barry Ozeroff, a 21-year police veteran and former SWAT sniper, is a hostage negotiator and motorcycle officer with the Gresham, Oregon Police Department. Barry lives in Oregon with his wife and three children; and RETURN FIRE, the sequel to SNIPER SHOT, is his second book.