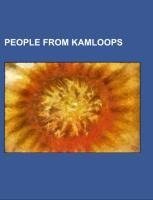 Source: Wikipedia. Pages: 27. Chapters: Aaron Keller, Allan McLean (outlaw), Allison MacInnes, Andrea Smith, Benjamin Ayres, Bert Marshall, Bob Mowat, Brendon Nash, Chris Masuak, Craig Endean, Darcy Robinson, Dave Vankoughnett, Don Ashby, Don Hay, Doug Lidster, Elise Gatien, Jack Davis (Canadian politician), Jean Baptiste Lolo, Jeff Stoddard, Jim Cotter (curler), Johnny Ussher, John Pozer, Kanao Inouye, Kelly Olynyk, Kevin Krueger, Leah Cairns, Mark Madryga, Mark Recchi, Mark Sweeten Wade, Matt Hunter, Merle Terlesky, Mitch Berger, Patrick Dohm, Rick Boh, Riley Nash, Robert and Henry Pratt, Robert T. Lackey, Shane Shu, Steve Marr, Sydney John Smith, Tim Watters, Todd Esselmont, Troy Ofukany, Wendy Phillips (author). Excerpt: Mark Louis Recchi (born February 1, 1968) is a retired Canadian professional ice hockey right winger who played 22 years in the National Hockey League (NHL), most notably for the Pittsburgh Penguins, Philadelphia Flyers, Montreal Canadiens and the Boston Bruins. Over the course of his career, Recchi was a member of three Stanley Cup-winning teams, the 1991 Pittsburgh Penguins, the 2006 Carolina Hurricanes and the 2011 Boston Bruins. Having previously announced that he would "sail off into the sunset" if Boston were victorious in the 2011 Stanley Cup Final, he announced his retirement in the post-game celebration after Boston's Stanley Cup championship. Recchi played his junior hockey for the Kamloops Blazers of the Western Hockey League. His number 8 was retired by the team shortly after he left for the NHL. He was drafted by the Pittsburgh Penguins, first playing in the NHL 1988, and was a key player on their Stanley Cup winning team in 1991. The following season he was traded to the Philadelphia Flyers as part of a deal that brought Rick Tocchet and Kjell Samuelsson to Pittsburgh. He played for Philadelphia from 1992 to 1995 as part of the "Crazy Eights" line with Eric Lindros and Brent Fedyk, including a 53-goal, 70-assist, 123-point season in 1992-93, still the Flyers single-season point scoring record. In 1995, he was traded to the Montreal Canadiens in a deal for Éric Desjardins, Gilbert Dionne and John LeClair, but was reacquired by the Flyers for the 1998-99 season, and was consistently among their top scorers. During the 1999-2000 season, he was a finalist for the Lester B. Pearson trophy as NHLPA MVP and he finished third in scoring, only 5 points behind Jaromír Jágr. In 2000 and 2004, the Flyers would make the Eastern Conference Finals but they would bow out of each series in seven games. In 2000, he was named "Kamloops Male Athlete of the 20th Century", and had a street named "Mark Recchi Way" in his honour. In August 2004, Recchi rejoined the Penguins a