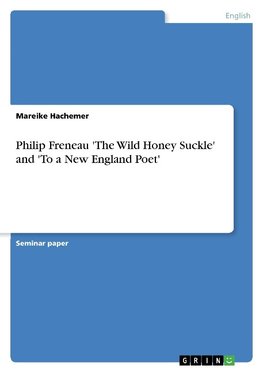 Seminar paper from the year 2004 in the subject American Studies - Literature, grade: 2.0, Johannes Gutenberg University Mainz (Department of English), course: Literature: From Colony to Early Republic, 11 entries in the bibliography, language: English, abstract: Philip Morin Freneau was one of America's most important writers. Especially in the period of the American Revolution he became famous as a teacher, secretary, seaman, master of a merchant ship, clerk at a post office, as a satirist, journalist, poet, editor of "Freeman's Journal" and the "National Gazette" and as a translator for Thomas Jefferson.


Two themes that influenced his writings were his interest in nature and the relationship between men and nature as well as the American Revolution. The question which this paper shall discuss is whether his two poems "The Wild Honey Suckle" and "To a New England Poet" are characteristic for his writings and whether they have anything in common, although they seem very different at first sight: The interest in nature becomes obvious, regarding the first poem. The attitude towards the English and his countrymen is expressed in the second one. In this paper I will at first analyze the two poems. I will summarize their content, as well as take a look at their structural and formal peculiarities. Then I will pay attention to the imagery and the stylistic devices that are used to transmit a certain atmosphere. Moreover, I will outline how the flower in "The Wild Honey Suckle" is described. In a manner analogous to that I am also going to focus on the description of America and England in "To a New England Poet."


Finally, I will try to answer the question whether the two poems are representative for other poems of Philip Freneau and whether Freneau can be called the "Poet of the American Revolution," since he mainly concentrated on that topic, or whether this is not enough to show the variety of themes he dealt with. Fortunately, there are interesting works written about Philip Freneau's poems Freneau as those of Lewis Leary, his biographer, Mary Weatherspoon Bowden, Jacob Axelrad, Nelson F. Adkins, Harry Hayden Clark or Richard C. Vitzthum. An interesting question is why there are so many different opinions on Philip Freneau's works. Is it true that "Philip Freneau failed in almost everything he attempted" (Leary The Rascal Freneau ix)?