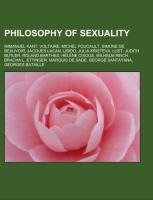 Source: Wikipedia. Pages: 111. Chapters: Immanuel Kant, Voltaire, Michel Foucault, Simone de Beauvoir, Jacques Lacan, Libido, Julia Kristeva, Lust, Judith Butler, Roland Barthes, Hélène Cixous, Wilhelm Reich, Bracha L. Ettinger, Marquis de Sade, George Santayana, Georges Bataille, Suzanne Lilar, Desire, Eve Kosofsky Sedgwick, Charles Fourier, Sex-positive movement, Gloria E. Anzaldúa, Sexual ethics, Écriture féminine, Sarah Kofman, Philosophy of sex, Luce Irigaray, Mirror stage, The Imaginary, Michael Uebel, Monique Wittig, Griselda Pollock, Name of the Father, Guy Hocquenghem, The Symbolic, Love Is..., The Guru, Objet petit a, Jonathan David Katz, The Seminars of Jacques Lacan, Alan Soble, Schizoanalysis, John D'Emilio, Otto Gross, Lack, The Ethical Slut, Élisabeth Badinter, Sinthome, Jouissance, Robert Reid-Pharr, Jacques Hassoun, Society for the Philosophy of Sex and Love. Excerpt: Immanuel Kant (German pronunciation: ; 22 April 1724 - 12 February 1804) was a German philosopher from Königsberg (today Kaliningrad of Russia), researching, lecturing and writing on philosophy and anthropology at the end of the 18th Century Enlightenment. At the time, there were major successes and advances in the sciences (for example, Isaac Newton, Carl Friedrich Gauss, and Robert Boyle) using reason and logic. But this stood in sharp contrast to the scepticism and lack of agreement or progress in empiricist philosophy. Kant's magnum opus, the Critique of Pure Reason, aimed to unite reason with experience to move beyond what he took to be failures of traditional philosophy and metaphysics. He hoped to end an age of speculation where objects outside experience were used to support what he saw as futile theories, while opposing the scepticism and idealism of thinkers such as Descartes, Berkeley and Hume. He said that 'it always remains a scandal of philosophy and universal human reason that the existence of things outside us ... should have to be assumed merely on faith, and that if it occurs to anyone to doubt it, we should be unable to answer him with a satisfactory proof'. Kant proposed a 'Copernican Revolution', saying that 'Up to now it has been assumed that all our cognition must conform to the objects; but ...let us once try whether we do not get farther with the problems of metaphysics by assuming that the objects must conform to our cognition'. Kant published other important works on religion, law, aesthetics, astronomy and history. These included the Critique of Practical Reason (Kritik der praktischen Vernunft, 1788), which deals with ethics, and the Critique of Judgment (Kritik der Urteilskraft, 1790), which looks at aesthetics and teleology. He aimed to resolve disputes between empirical and rationalist approaches. The former asserted that all knowledge comes through experience; the latter maintained that reason and innate ideas were prior. Kant argued