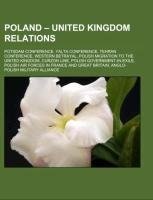 Source: Wikipedia. Pages: 39. Chapters: Potsdam Conference, Yalta Conference, Tehran Conference, Western betrayal, Polish migration to the United Kingdom, Curzon Line, Polish government-in-exile, Polish Air Forces in France and Great Britain, Anglo-Polish military alliance, List of Ambassadors from the United Kingdom to Poland, Peking Plan, Polish Embassy, London, Polish Resettlement Corps, Eastland Company, Sir Owen St. Clair O'Malley, Federation of Poles in Great Britain, British Polish Chamber of Commerce, Interallied Mission to Poland, Literary Association of the Friends of Poland, British Military Mission to Poland. Excerpt: Western betrayal, also called Yalta betrayal, refers to a range of critical views concerning the foreign policies of several Western countries between approximately 1919 and 1968 regarding Eastern and Central Europe. Historically it was intertwined with some of the most significant geopolitical events during the 20th century, including the Treaty of Versailles at the end of World War I, the rise and empowerment of the Third Reich (Nazi Germany), the rise of the Soviet Union as a dominant superpower with control of large parts of Eastern Europe, and various treaties, alliances and positions taken during and after World War II and on into the Cold War. The perception of betrayal on the part of the peoples in the territories caught between Nazi Germany and the Soviet Union comes about because the western allies promoted democracy and self-determination, signing pacts and forming military alliances prior and during World War II, but subsequently failed to meet the expectations raised by those pacts. Examples include policies or acts of appeasement prior to World War II which saw Western allies such as Czechoslovakia and Poland annexed or conquered by Nazi Germany without regard for prior treaties which ostensibly provided support or protection, as well as the ceding of countries and territories to the brutal Soviet regime after World War II and the refusal to take firm action against Soviet acts of repression or in support of uprisings while simultaneously claiming the role of supporting freedom and democracy. In a few cases deliberate duplicity is alleged, whereby secret agreements or intentions are claimed to have existed in conflict with understandings given publicly, for example, Churchill taking the position with the U.S.S.R. privately that the Atlantic Charter did not apply to the Baltic states. In the case of the Yalta Conference and its aftermath, some historians argue that British Prime Minister Churchill and U.S. President Roosevelt had little or no option but