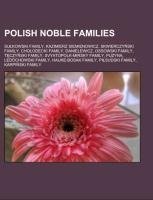 Source: Wikipedia. Pages: 33. Chapters: Sulkowski family, Kazimierz Siemienowicz, Skwierczynski family, Cholodecki family, Danielewicz, Ossowski family, Teczynski family, Svyatopolk-Mirsky family, Puzyna, Ledóchowski family, Hauke-Bosak family, Pilsudski family, Karpinski family, Von Loppenow, Weyher family, Taczanowski family, Dzialynski family, Mystkowski family, Movilesti family, Kurnatowski, Kalinowski family, Hryniewiecki family, Sielecki family, Antoni Baranowski, Dassanowsky family, Von Plötzke family, Markuszewski family, Tyzenhaus family, Baczewski family, Kossakowski, Mielzynski, Bialobrzeski family, Aleksander Sluszka, Kiszka family, Hlebowicz family, Ostroróg family, Koscielecki Family, Piotrowski family, Mycielski family, Zaleski family, Ostoja-Ostaszewski. Excerpt: The Sulkowski (Polish plural: Sulkowscy) family is a Polish family of nobility and gentry consisting of famous members and having owned palaces in Rydzyna and Bielsko. Family motto: All for the Fatherland. The origins of the Sulkowski family are relatively obscure. The Sulkowski family originally lived in a village known as Sulków, now known as Sulkowo Borowe, in the Mlawa district 100 kilometers (60 miles) north of Warsaw. Of the family manor house, only a single gatepost remains. Close by there is a wooden church built in 1644. The earliest records are from the 16th century. For the first four generations only the oldest son has been recorded. Aleksander Józef Sulkowski, the progenitor of the Sulkowski noble line.According to some sources, Elzbieta Szalewska had a liaison with Augustus II the Strong and bore him an illegitimate son. Her husband, Stanislaw Sulkowski, gave this child, Aleksander Józef Sulkowski, his last name. On March 18, 1754, he gained from Queen Maria Theresa of Austria the title of Reichsfürst, along with the right of primogeniture. Additionally, in the same year, the right of the princely title was granted to every descending member of the Sulkowski family. In 1752, the State Country (Status Maiores) of Bielsko was purchased by Aleksander Józef. In that same year, the State Country was changed to the status of a lower principality (Fürstentum). On November 2, 1754, Bohemian Queen Maria Theresa of Austria created the Principality of Bielsko (Herzogtum Bielitz). The next owners of the Principality of Bielsko had the right to the title of Herzog (Duke), during which time the remaining members of the family counted themselves amongst the lesser noble status of Fürst (Prince). Aleksander Józef was the progenitor of the Bielsko line and the first of the Bielsko ordynats. Antoni, who established the Sulkowski Ordynat, was the progenitor of the "Wielkopolska", or Rydzyna, line of the Sulkowski family. The Rydzyna line became extinct in 1909 along with