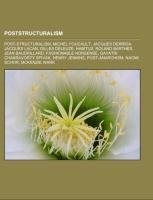 Source: Wikipedia. Pages: 67. Chapters: Post-structuralism, Michel Foucault, Jacques Derrida, Jacques Lacan, Gilles Deleuze, Habitus, Roland Barthes, Jean Baudrillard, Fashionable Nonsense, Gayatri Chakravorty Spivak, Henry Jenkins, Post-anarchism, Naomi Schor, McKenzie Wark, Mirror stage, The Imaginary, Martin A. Hainz, Intertextuality, Roy Ascott, Anthony Wilden, Name of the Father, The Symbolic, Objet petit a, The Seminars of Jacques Lacan, Interdiscourse, The Real, Lack, Dialogic, Sinthome, Dispositif, Stephen David Ross, Field, Cahiers pour l'Analyse, Julie Rivkin, Jouissance, Always already, James Brusseau, Juan-David Nasio, Discontinuity, Lacanian Ink, Anselm Haverkamp, Post-structural feminism. Excerpt: Jacques Derrida ( ; French pronunciation: ; July 15, 1930 - October 9, 2004) was a French Pied-noir philosopher, born in French Algeria. He developed the critical theory known as deconstruction and his work has been labeled as post-structuralism and associated with postmodern philosophy. His output of more than 40 published books, together with essays and public speaking, has had a significant impact upon the humanities, particularly on literary theory and continental philosophy. Perhaps Derrida's most quoted and famous assertion, which appears in an essay on Rousseau in his highly influential Of Grammatology (1967), is the statement that "there is nothing outside the text" (il n'y a pas de hors-texte), meaning that there is nothing outside context. Critics of Derrida have quoted it as a slogan to characterize and stigmatize deconstruction. Deconstruction has become associated with the attempt to expose and undermine the oppositions and paradoxes on which particular texts, philosophical and otherwise, are founded. He frequently called such paradoxes "binary oppositions." Derrida's strategy involved explicating the historical roots of philosophical ideas, questioning the "metaphysics of presence" that he sees as having dominated philosophy since the ancient Greeks, careful textual analysis, and attempting to undermine and subvert the paradoxes themselves. Derrida's work has had implications across many fields, including literature, architecture (in the form of deconstructivism), sociology, and cultural studies. Particularly in his later writings, he frequently addressed ethical and political themes, and his work influenced various activist and other political movements. His widespread influence made him a well-known cultural figure, while his approach to philosophy and the purported difficulty of his work also made him a figure of some controversy. His work has been seen as a challenge to the unquestioned assumptions of the Western philosophical tradition and Western