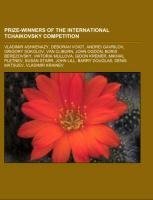 Prize-winners of the International Tchaikovsky Competition

Source: Wikipedia. Pages: 24. Chapters: Vladimir Ashkenazy, Deborah Voigt, Andrei Gavrilov, Grigory Sokolov, Van Cliburn, John Ogdon, Boris Berezovsky, Viktoria Mullova, Gidon Kremer, Mikhail Pletnev, Susan Starr, John Lill, Barry Douglas, Denis Matsuev, Vladimir Krainev, Viktoria Postnikova, Ralph Evans, Miroslav Kultyshev, Mayuko Kamio, Peter Donohoe, Arthur Moreira Lima, Sergey Tarasov, Valery Klimov, Boris Gutnikov, Ayako Uehara. Excerpt: Deborah Voigt (born August 4, 1960) is an American operatic soprano. Voigt regularly performs in opera houses and concert halls worldwide. Debbie Joy Voigt was born to a religious Southern Baptist family in 1960 and raised in Wheeling, Illinois outside Chicago. She joined the choir at a Baptist church at the age of five and began learning the piano. Her mother sang and played the piano at church while her two younger brothers sang in rock music bands. She became interested in music from her experience at church. When she was 14, her family moved to Placentia, California, located in Orange County. It was traumatic to Voigt, then in her teens, to move to "Southern California, the land of endless sunshine and impossibly perfect bodies." She attended El Dorado High School, where she was a member of the El Dorado Vocal Music program. She was also involved in the theatre program at El Dorado, where she starred in musicals including Fiddler on the Roof, The Music Man and Mame. In an interview, Voigt recalled the time in which she did not seriously consider becoming an opera singer and even did not know the existence of the Metropolitan Opera. Upon graduation in 1978, Voigt studied choral conducting at Chapman College in Orange, California. However she dropped out to pursue other careers and worked as a computer operator for two years. Voigt won a vocal scholarship funded by the Crystal Cathedral in Garden Grove, California so that she could enroll in the voice program at California State University, Fullerton. She met the voice teacher Professor Jane Paul Hummel at school and trained under her guidance for about eight years. Voigt was the finalist of the Met National Council Auditions for Young Singers in 1985. Voigt won awards from many prestigious singing competitions (see below). She made her Carnegie Hall debut in 1988. She won the Adler Fellow and apprenticed at San Francisco Opera's Merola Program for two years where she studied seven major roles and she took a class