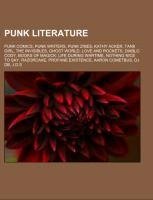 Source: Wikipedia. Pages: 41. Chapters: Punk comics, Punk writers, Punk zines, Kathy Acker, Tank Girl, The Invisibles, Ghost World, Love and Rockets, Diablo Cody, Books of Magick: Life During Wartime, Nothing Nice to Say, Razorcake, Profane Existence, Aaron Cometbus, DJ DB, J.D.s, Homocore, Maximumrocknroll, Ariel Schrag, Sluggo!, The Positives, Fly, Punk Planet, Slash, Punk Globe, Kill Your Boyfriend, Sniffin' Glue, Death To The World, Cristy Road, Verbicide Magazine, Flipside, Slug and Lettuce, Peter Pank, Rolling Thunder, Kill Your Pet Puppy, No Cure, Absolutely Zippo, Burnt Offering, Touch and Go: The Complete Hardcore Punk Zine '79-'83", The Encyclopedia of Punk, Black Market Magazine, Chainsaw, Peroxide, East Coast Rising, Suburban Voice, KCDIY, Jamming. Excerpt: Tank Girl is a British comic created by Jamie Hewlett and Alan Martin. Originally drawn by Jamie Hewlett, the strip has recently been drawn by Rufus Dayglo, Ashley Wood, and Mike McMahon. The eponymous character Tank Girl drives a tank, which is also her home. She undertakes a series of missions for a nebulous organization before making a serious mistake and being declared an outlaw for her sexual inclinations and her substance abuse. The comic centres on her misadventures with her boyfriend, Booga, a mutant kangaroo. The comic's style was heavily influenced by punk visual art, and strips were frequently deeply disorganized, anarchic, absurdist, and psychedelic. The strip features various elements with origins in surrealist techniques, fanzines, collage, cut-up technique, stream of consciousness, and metafiction, with very little regard or interest for conventional plot or committed narrative. The strip was initially set in a stylized post-apocalyptic Australia, although it drew heavily from contemporary British pop culture. Martin and Hewlett first met in the mid-1980s in Worthing, when Martin was in a band with Philip Bond called the University Smalls. One of their tracks was a song called "Rocket Girl". They had started adding the suffix 'girl' to everything habitually after the release of the Supergirl movie, but "Rocket Girl" was a student at college who Bond had a crush on and apparently bore a striking resemblance to a Love and Rockets character. They began collaborating on a comic/fanzine called Atomtan, and while working on this, Jamie had drawn The image was published in the fanzine as a one-page ad (with a caption that read: "SHE'LL BREAK YOUR BACK AND YOUR BALLS!"), but the Tank Girl series first appeared in the debut issue of Deadline (1988), a UK magazine intended as a forum for new comic talent, or as its publishers Brett Ewins and Tom Astor put it, "a forum for the wild, wacky and hitherto unpublishable," and it continued until the end of the magazin