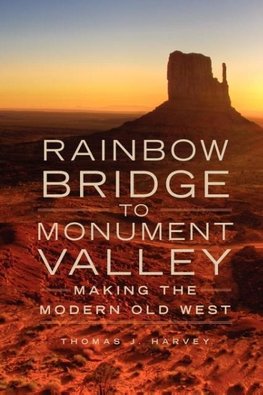 The Colorado River Plateau is home to two of the best-known landscapes in the world: Rainbow Bridge in southern Utah and Monument Valley on the Utah-Arizona border.... Viac o knihe

The Colorado River Plateau is home to two of the best-known landscapes in the world: Rainbow Bridge in southern Utah and Monument Valley on the Utah-Arizona border. Twentieth-century popular culture made these places icons of the American West, and advertising continues to exploit their significance today. In Rainbow Bridge to Monument Valley, Thomas J. Harvey artfully tells how Navajos and Anglo-Americans created fabrics of meaning out of this stunning desert landscape, space that western novelist Zane Grey called "the storehouse of unlived years," where a rugged, more authentic life beckoned. Harvey explores the different ways in which the two societies imbued the landscape with deep cultural significance.

Navajos long ago incorporated Rainbow Bridge into the complex origin story that embodies their religion and worldview. In the early 1900s, archaeologists crossed paths with Grey in the Rainbow Bridge area. Grey, credited with making the modern western novel popular, sought freedom from the contemporary world and reimagined the landscape for his own purposes. In the process, Harvey shows, Grey erased most of the Navajo inhabitants. This view of the landscape culminated in filmmaker John Ford's use of Monument Valley as the setting for his epic mid-twentieth-century Westerns. Harvey extends the story into the late twentieth century when environmentalists sought to set aside Rainbow Bridge as a symbolic remnant of nature untainted by modernization.

Tourists continue to flock to Monument Valley and Rainbow Bridge, as they have for a century, but the landscapes are most familiar today because of their appearances in advertising. Monument Valley has been used to sell perfume, beer, and sport utility vehicles. Encompassing the history of the Navajo, archaeology, literature, film, environmentalism, and tourism, Rainbow Bridge to Monument Valley explores how these rock formations, Navajo sacred spaces still, have become embedded in the modern identity of the American West-and of the nation itself.

Thomas J. Harvey is a reporter for the Salt Lake Tribune and co-editor of Imagining the Big Open: Nature, Identity, and Play in the New West.

The Cut Out Girl

1968 Year That Rocked the World