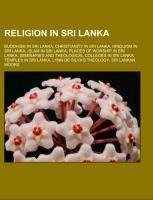 Source: Wikipedia. Pages: 54. Chapters: Buddhism in Sri Lanka, Christianity in Sri Lanka, Hinduism in Sri Lanka, Islam in Sri Lanka, Places of worship in Sri Lanka, Seminaries and theological colleges in Sri Lanka, Temples in Sri Lanka, Lynn de Silva's theology, Sri Lankan Moors, American Ceylon Mission, Gal Vihara, Mahavamsa, Kataragama, Polonnaruwa Vatadage, Solosmasthana, List of Hindu temples in Sri Lanka, Theological College of Lanka, Mihintale, Saman, Amarapura Nikaya, Diyawadana Nilame, The Church of Jesus Christ of Latter-day Saints in Sri Lanka, Vallipuram, Mahamevnawa Buddhist Monastery, Relic of the tooth of the Buddha, Sri Kalyani Yogasrama Samstha, Hatadage, Culavamsa, Asokaramaya Buddhist Temple, Roman Catholicism in Sri Lanka, Embekka Devalaya, Sinhalese Buddhist nationalism, Hatthikuchchi, Rankoth Vehera, Freedom of religion in Sri Lanka, Buddhist and Pali University of Sri Lanka, Natha Devale, Kandy, List of Mahamevnawa branches, Deva people, Vidyodaya Pirivena, Bishop of Colombo, Jaya Sri Maha Bodhi, Dasa sil mata, Muslim National Unity Alliance, Lanka Lutheran Church, Batticotta Seminary, The Buddhist, Suvisuddharamaya, Ramanna Nikaya, Protestantism in Sri Lanka, Siladhara, Vidyalankara Pirivena, Reswehera. Excerpt: Lynn de Silva's theology began at an early stage in Lynn de Silva's ministry, when his interest in Buddhism and its culture began to increase. He believed that the credibility of Christianity depended on its ability to relate to Buddhism, which was the faith of the majority of the Sri Lankan population. His objective was to develop a richer appreciation of the similarities between Buddhism and Christianity, in particular, to communicate the Christian message in a manner that the Sri Lankan culture understood, and to construct a theology that is focused towards the Buddhist cultural environment. To this end, he used Buddhist concepts to communicate Christian beliefs in a language understood from the Buddhist context, and he aimed at extending Christian theology with Buddhist concepts in order to gain a more thorough understanding of Christianity. In his book The Problem of the Self in Buddhism and Christianity, de Silva states the following: There is a growing body of opinion within Christianity that its theology is shop-soiled and needs drastic revision in order first, to re-root it in the basic biblical teaching, secondly, to bring it into harmony with new insights and modes of thought coming from other faiths, ideologies and modern science and thirdly, to relate it to social realities... What I have attempted is to help this process of transformation in Christian thinking. However, theological thinking in order to be meaningful and relevant must be contextual. The context of this book is Buddhism. To obtain the necessary background in Sri Lankan Buddhist practices, de Silva consulted reputed Buddhist monks and scholars, visited Buddhist places of worship, and consulted written sources on Sri Lankan Buddhism. Although most of his studies were completed in English, he took a special effort to master Sinhalese and the Sri Lankan culture. Furthermore, he became proficient in Pali, the language of the Buddhist scriptures. His findings eventually led to his most popular