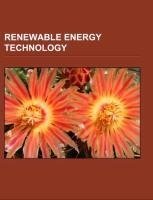 Source: Wikipedia. Pages: 45. Chapters: 3M, Aquanator, Artificial photosynthesis, CETO, Dysprosium, Evopod, H-Bio, Hybrid renewable energy system, IEEE Smart Grid, Joint Center for Artificial Photosynthesis, NExBTL, Oyster wave energy converter, Pelamis Wave Energy Converter, Renewable energy power station, Renewable heat, Saltire Prize, Soft energy technology, Solar fuel, Solar power in Australia, Spider9, Vegetable oil refining, Wells turbine. Excerpt: Artificial photosynthesis is a chemical process that replicates the natural process of photosynthesis, a process that converts sunlight, water, and carbon dioxide into carbohydrates and oxygen. The term is commonly used to refer to any scheme for capturing and storing the energy from sunlight in the chemical bonds of a fuel (a solar fuel). Photocatalytic water splitting converts water into protons (and eventually hydrogen) and oxygen, and is a main research area in artificial photosynthesis. Light-driven carbon dioxide reduction is another studied process, replicating natural carbon fixation. Research developed in this field encompasses design and assembly of devices (and their components) for the direct production of solar fuels, photoelectrochemistry and its application in fuel cells, and engineering of enzymes and photoautotrophic microorganisms for microbial biofuel and biohydrogen production from sunlight. Many, if not most, of the artificial approaches are bio-inspired, i.e., they rely on biomimetics. The photosynthetic reaction can be divided into two half-reactions (oxidation and reduction), both of which are essential to producing fuel. In plant photosynthesis, water molecules are photo-oxidized to release oxygen and protons. The second stage of plant photosynthesis (also known as the Calvin-Benson cycle) is a light-independent reaction that converts carbon dioxide into glucose. Researchers of artificial photosynthesis are developing photocatalysts to perform both of these reactions separately. Furthermore, the protons resulting from water splitting can be used for hydrogen production. These catalysts must be able to react quickly and absorb a large percentage of solar photons. Whereas photovoltaics can provide direct electrical current from sunlight, the inefficiency of fuel production from photovoltaic electricity (indirect process) and the fact sunshine is not constant throughout time sets a limit to its use. A way of using natural photosynthesis is via