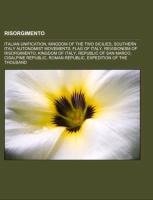 Source: Wikipedia. Pages: 59. Chapters: Italian unification, Kingdom of the Two Sicilies, Southern Italy autonomist movements, Flag of Italy, Revisionism of Risorgimento, Kingdom of Italy, Republic of San Marco, Cisalpine Republic, Roman Republic, Expedition of the Thousand, Capture of Rome, Roman Question, Italian Republic, Belfiore martyrs, Third Rome, Kingdom of Lombardy-Venetia, Redshirts, Timeline of Italian unification, Brigandage in the Two Sicilies, United Provinces of Central Italy, Young Italy, Royal war and popular war, Legion of Antibes, Associazione Agraria Subalpina, Papal Legations, Il Conciliatore, Risanamento. Excerpt: Italian unification (Italian: , or "The Resurgence") was the political and social movement that agglomerated different states of the Italian peninsula into the single state of Italy in the 19th century. Despite a lack of consensus on the exact dates for the beginning and end of this period, many scholars agree that the process began in 1815 with the Congress of Vienna and the end of Napoleonic rule, and ended sometime around 1861 with the Franco-Prussian War. The last città irredente however, did not join the Kingdom of Italy until after World War I. Italian unification processAfter the fall of the Western Roman Empire, Italy gradually developed into a system of city-states. This system lasted through the Renaissance but began to deteriorate with the rise of modern nation-states in the early modern period. Italy, including the Papal States, then became the site of proxy fights between the major powers, notably the Holy Roman Empire (later Austria as well as Prussia) and France. In the early 19th century, Italy, like much of Europe, fell under the sway of Napoleon. As Napoleon's reign began to fail, other national monarchs he had installed tried to keep their thrones by feeding nationalistic sentiments, setting the stage for the revolutions to come. Among these monarchs were the viceroy of Italy, Eugène de Beauharnais, who tried to get Austrian approval for his succession to the Kingdom of Italy, and Joachim Murat, who called for Italian patriots' help for the unification of Italy under his rule. Following the defeat of Napoleonic France, the Congress of Vienna (1815) was convened to redraw the European continent. In Italy, the Congress restored the pre-Napoleonic patchwork of independent governments, either directly ruled or strongly influenced by the prevailing European powers, particularly Austria. At the time, the struggle for Italian unification was perceived to be waged primarily against the Austrian Empire and the Habsburgs, since they directly controlled the