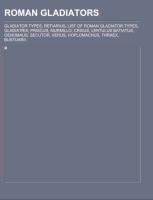 Source: Wikipedia. Pages: 24. Chapters: Gladiator types, Retiarius, List of Roman gladiator types, Gladiatrix, Priscus, Murmillo, Crixus, Lentulus Batiatus, Oenomaus, Secutor, Verus, Hoplomachus, Thraex, Bustuarii. Excerpt: A gladiator (Latin: , "swordsman", from , "sword") was an armed combatant who entertained audiences in the Roman Republic and Roman Empire in violent confrontations with other gladiators, wild animals, and condemned criminals. Some gladiators were volunteers who risked their legal and social standing and their lives by appearing in the arena. Most were despised as slaves, schooled under harsh conditions, socially marginalized, and segregated even in death. Irrespective of their origin, gladiators offered audiences an example of Rome's martial ethics and, in fighting or dying well, they could inspire admiration and popular acclaim. They were celebrated in high and low art, and their value as entertainers was commemorated in precious and commonplace objects throughout the Roman world. The origin of gladiatorial combat is open to debate. There is evidence of it in funeral rites during the Punic Wars of the 3rd century BCE, and thereafter it rapidly became an essential feature of politics and social life in the Roman world. Its popularity led to its use in ever more lavish and costly spectacles or "gladiatorial games". The games reached their peak between the 1st century BCE and the 2nd century CE, and they persisted not only throughout the social and economic crises of the declining Roman state but even after Christianity became the official religion in the 4th century CE. Christian emperors continued to sponsor such entertainments until at least the late 5th century CE, when the last known gladiator games took place. Early literary sources seldom agree on the origins of gladiators and the gladiator games. In the late 1st century BCE, Nicolaus of Damascus believed they were Etruscan. A generation later, Livy wrote that they were first held in 310 BCE by the Campanians in celebration of their victory over the Samnites. Long after the games had ceased, the 7th century CE writer Isidore of Seville derived Latin lanista (manager of gladiators) from the Etruscan for executi