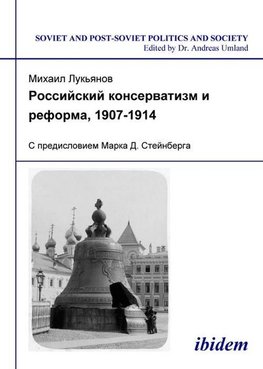 Conservatives displayed deep dissatisfaction with the state of affairs in Russia in 1907-1914. A critical attitude toward reality was expressed more strongly by extreme right-wing supporters of the All-Russian Dubrovinist Union of Russian People and less... Viac o knihe

Conservatives displayed deep dissatisfaction with the state of affairs in Russia in 1907-1914. A critical attitude toward reality was expressed more strongly by extreme right-wing supporters of the All-Russian Dubrovinist Union of Russian People and less strongly by relatively moderate sympathizers of the All-Russian National Union. Over time, dissatisfaction spread from the right to the left, capturing even representatives of the left flank of Russian conservatism by the beginning of World War I. Their negative mood increased especially after the death of Stolypin, who was accepted as a symbol of conservative reform implemented in a national spirit. Conservatives of various persuasions, advocates and opponents of reform, came together in a negative evaluation of the current uncertain situation which satisfied neither.An explanation for this must be sought above all in the conservatives' attitude toward Russian modernization. Although Russian conservatism did not, in principle, reject the need to adapt to new realities, it was extremely difficult for conservatives to accept that variant of socioeconomic and political modernization that was taking place in Russia in practice.The social base of Russian conservatism was patently inadequate for the new trends. According to statistical data about the deputies of the Third and Fourth Duma conservative factions attracted individuals from the dominating ethno-confessional group, who, at the same time due to poverty, low level of education, and connection with stagnating agriculture were deprived of real chances for success in a quickly modernizing Russia. Russian conservatism had become the political expression of the interests of social strata that were losing their influence and were those least adapted to the new conditions.There existed another, ideological-value dimension to the conflict between conservatives and the status quo. The ideals of Russian conservatives on the eve of World War I were openly archaic and, in essence, presented themselves as variations of the notorious Uvarov's triad orthodoxy, autocracy, nationality. Describing their vision of an optimal political organization, they allotted the central place to autocracy, insisted on the necessity to secure the dominant position for the Russian and Orthodox majority. They argued that agriculture was destined to remain eternally the key branch of national economy.The introduction of representative legislative institutions, rise of economic influence of some national minorities, rapid industrial growth, and serious problems in agriculture directly contradicted the conservatives' notion of the optimal model for the state's structure. Political and socio-economic modernization was looked at as at mortal danger to the old regime, or even as the beginning of a Götterdämmerung. In this situation, conservatives worked out a series of political and socio-economic programs which became alternatives to official policies. Their rejection gave rise to a wave of gloomy forecasts and eschatological expectations; the famous Durnovo memorandum was only one example of documents expressing emotions of this kind. Conservative viewed the future with pessimism, and this pessimistic mood turned to be justified by the catastrophic events in a few years.Before the Great War, conservatives had stopped viewing themselves as buttresses of the Russian political system. This condition, no less than pressure from the left, brought about the quick and irreversible disintegration of the 3rd-of-June Regime. The pre-1917 status-quo definitely did not suit socialists or liberals, but neither did it satisfy the conservatives.