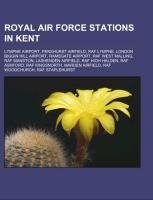 Source: Wikipedia. Pages: 40. Chapters: Lympne Airport, Penshurst Airfield, RAF Lympne, London Biggin Hill Airport, Ramsgate Airport, RAF West Malling, RAF Manston, Lashenden Airfield, RAF High Halden, RAF Ashford, RAF Kingsnorth, Marden Airfield, RAF Woodchurch, RAF Staplehurst, RAF Headcorn, RAF Eastchurch, RAF Wye, RAF Detling, RNAS Capel, RAF Brenzett, Folkestone Racecourse, RNAS Kingsnorth, RAF Newchurch, RAF Throwley, RAF Hawkinge, RAF Gravesend. Excerpt: Lympne Airport (pronounced ), (IATA: LYM, ICAO: EGMK), was a military and later civil airfield at Lympne, Kent, United Kingdom, which operated from 1916 to 1984. RFC Lympne was originally an acceptance point for aircraft being delivered to, and returning from, France during the First World War. Later designated as a First Class Landing Ground, RAF Lympne became a civil airfield in 1919 and saw the operation of early air mail services after the 1918 armistice. It was one of the first four airfields in the United Kingdom with customs facilities. Lympne was also involved in the evolution of air traffic control, with facilities developing and improving during the 1920s and 1930s. A number of record-breaking flights originated or ended at Lympne. During the 1920s Lympne was the venue for the Lympne light aircraft trials from which a number of aircraft types entered production. Air racing was also held at Lympne. Just prior to the Second World War Lympne was requisitioned by the Fleet Air Arm. It was named HMS Buzzard and renamed HMS Daedalus II three months later, before being transferred to the Royal Air Force in May 1940. During the war Lympne was a front-line fighter base, RAF Lympne. It was heavily bombed during the Battle of Britain in 1940 and put out of action for a number of weeks. It was too close to the coast to be used as a squadron base, but squadrons were detached there on a day-to-day basis. Lympne was also to have been the landing place for a German aircraft used in a plot to kidnap Adolf Hitler, with preparations made by the Royal Air Force for his arrival. Lympne returned to civilian use on 1 January 1946. In 1948 the first air ferry service was inaugurated at Lympne by Silver City Airways. Problems with waterlogging of the grass runway and the refusal of the Ministry of Transport and Civil Aviation to upgrade the airfield led to Silver City transferring operations to Lydd (Ferryfield) in 1954. The airport was sold to Skyways in 1955. Skyways operated a