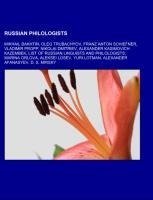 Source: Wikipedia. Pages: 42. Chapters: Mikhail Bakhtin, Oleg Trubachyov, Franz Anton Schiefner, Vladimir Propp, Nikolai Dmitriev, Alexander Kasimovich Kazembek, List of Russian linguists and philologists, Marina Orlova, Aleksei Losev, Yuri Lotman, Alexander Afanasyev, D. S. Mirsky, Dmitry Likhachov, Konstantin Bogdanov, Irakly Andronikov, Mikhail Gasparov, Valentin Voloshinov, Aleksey Shakhmatov, Otto von Böhtlingk, Izmail Sreznevsky, Vyacheslav Vsevolodovich Ivanov, Alexander Veselovsky, Nikolai Rogov, Fyodor Buslaev, Viktor Vinogradov, Pavel Nikolaevich Medvedev, Dmitry Gerasimov, Zara Mints, Yakov Grot, Nikolay Gretsch, Boris Grakov, Natan Eidelman, Mihhail Lotman, Alexander Vostokov, Galina Varlamova, Vladimir Toporov, Nikolai Fedorenko, Lev Uspensky, Aleksandr Nazarenko, Vsevolod Miller, Peter Bezsonov, Boris Uspensky, Fyodor Braun, Pyotr Pletnyov, Vladimir Abashev, Dmitry Ushakov, Pyotr Kireevsky, Nochum Shtif. Excerpt: Mikhail Mikhailovich Bakhtin (Russian: , pronounced ) (November 17, 1895, Oryol - March 7, 1975) was a Russian philosopher, literary critic, semiotician and scholar who worked on literary theory, ethics, and the philosophy of language. His writings, on a variety of subjects, inspired scholars working in a number of different traditions (Marxism, semiotics, structuralism, religious criticism) and in disciplines as diverse as literary criticism, history, philosophy, anthropology and psychology. Although Bakhtin was active in the debates on aesthetics and literature that took place in the Soviet Union in the 1920s, his distinctive position did not become well known until he was rediscovered by Russian scholars in the 1960s. Bakhtin had a difficult life and career, and few of his works were published in an authoritative form during his lifetime. As a result, there is substantial disagreement over matters that are normally taken for granted: what discipline he worked in (was he a philosopher or literary critic?), how to periodize his work, and even what texts he wrote (see below). He is known for a series of concepts that have been used and adapted in a number of disciplines: dialogism, the carnivalesque, the chronotope, heteroglossia and "outsidedness" (the English translation of a Russian term vnenakhodimost, sometimes rendered into English-from French rather than from Russian-as "exotopy"). Together these concepts outline a distinctive philosophy of language and culture that has at its center the claims that all discourse is in essence a dialogical exchange and that this endows all language with a particular ethical or ethico-political force. As a literary theorist, Bakhtin is associated with the Russian Formalists, and his work is compared with that of Yuri Lotman; in 1963 Roman Jakobson mentioned him as one of the few intelligent critics of Formalism. During the 1920s, Bakhtin's work tended to focus on ethics and aesthetics in general. Early pieces such as Towards a