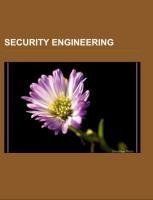 Source: Wikipedia. Pages: 52. Chapters: 3D security, Bank vault, Beyond Fear: Thinking Sensibly about Security in an Uncertain World, Blacker (security), Boundaries of Security Report, Closed-circuit television, Crime prevention through environmental design, Critical infrastructure protection, Cyber spying, European Programme for Critical Infrastructure Protection, Fail-stop, Failing badly, Future Fibre Technologies, Gated community, Guard tour patrol system, Home safety, Identity document forgery, Intelligent banknote neutralisation system, National Infrastructure Protection Plan, Natural surveillance, Pan-tilt-zoom camera, Physical security, Physical security information management, Proactive Cyber Defence, Red/black concept, Secured by Design, Security operations center, Security Patterns, Security smoke, SmartWater, Software security assurance, Technical failure. Excerpt: Critical infrastructure protection (CIP) is a concept that relates to the preparedness and response to serious incidents that involve the critical infrastructure of a region or nation. The American Presidential directive PDD-63 of May 1998 set up a national program of "Critical Infrastructure Protection". In Europe the equivalent 'European Programme for Critical Infrastructure Protection' (EPCIP) refers to the doctrine or specific programs created as a result of the European Commission's directive EU COM(2006) 786 which designates European critical infrastructure that, in case of fault, incident or attack, could impact both the country where it is hosted and at least one other European Member State. Member states are obliged to adopt the 2006 directive into their national statutes. The US CIP is a national program to ensure the security of vulnerable and interconnected infrastructures of the United States. In May 1998, President Bill Clinton issued Presidential directive PDD-63 on the subject of Critical Infrastructure Protection. This recognized certain parts of the national infrastructure as critical to the national and economic security of the United States and the well-being of its citizenry, and required steps to be taken to protect it. This was updated on December 17, 2003 by President Bush through Homeland Security Presidential Directive HSPD-7 for Critical Infrastructure Identification, Prioritization, and Protection. The directive broadened the definition of infrastructure in accordance with the Patriot Act, as the physical and virtual systems that are ' so vital to the United States that the incapacity or destruction of such systems and assets would have a debilitating impact on security, national economic security, national public health or safety.' The systems and networks that make up the infrastructure of society are often taken for granted, yet a disruption to just one of those systems can have dire consequences across other sectors. Take, for example