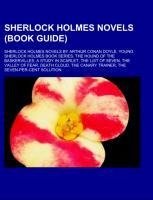 Source: Wikipedia. Commentary (novels not included). Pages: 26. Chapters: Sherlock Holmes novels by Arthur Conan Doyle, Young Sherlock Holmes book series, The Hound of the Baskervilles, A Study in Scarlet, The List of Seven, The Valley of Fear, Death Cloud, The Canary Trainer, The Seven-Per-Cent Solution, The Sign of the Four, The Six Messiahs, Red Leech, The Other Log of Phileas Fogg, A Samba for Sherlock, All-Consuming Fire, The West End Horror, The Italian Secretary, Sherlock Holmes's War of the Worlds, The Last Sherlock Holmes Story, Dust and Shadow, The Strange Case of Mrs. Hudson's Cat, Sherlock Holmes: The Unauthorized Biography, Sherlock Holmes and the Railway Maniac, The Mandala of Sherlock Holmes. Excerpt: The Hound of the Baskervilles is the third of four crime novels by Sir Arthur Conan Doyle featuring the detective Sherlock Holmes. Originally serialised in The Strand Magazine from August 1901 to April 1902, it is set largely on Dartmoor in Devon in England's West Country and tells the story of an attempted murder inspired by the legend of a fearsome, diabolical hound. Sir Arthur Conan Doyle wrote this story shortly after returning to his home Undershaw from South Africa, where he had worked as a volunteer physician at the Langman Field Hospital in Bloemfontein. He was assisted with the plot by a 30-year-old Daily Express journalist named Bertram Fletcher Robinson (1870-1907). His ideas came from the legend of Richard Cabell, which was the fundamental inspiration for the Baskerville tale of a hellish hound and a cursed country squire. Cabell's tomb can be seen in the Devon town of Buckfastleigh. Squire Richard Cabell lived during the 17th century and was the local squire at Buckfastleigh. He had a passion for hunting and was what in those days was described as a 'monstrously evil man'. He gained this reputation for, amongst other things, immorality and having sold his soul to the Devil. There was also a rumour that he had murdered his wife. On the 5th of July 1677, he died and was laid to rest in 'the sepulchre,' but that was only the beginning of the story. The night of his interment saw a phantom pack of hounds come baying across the moor to howl at his tomb. From that night onwards, he could be found leading the phantom pack across the moor, usually on the anniversary of his death. If the pack were not out hunting, they could be found ranging around his grave howling and shrieking. In an attempt to lay the soul to rest, the villagers built a large building around the tomb, and to be doubly sure a huge slab was placed on top of the grave to stop the ghost of the squire escaping. Moreover, Devon's folklore includes tales of a fearsome supernatural dog known as the