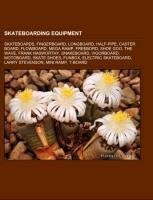 Source: Wikipedia. Pages: 30. Chapters: Skateboards, Fingerboard, Longboard, Half-pipe, Caster board, Flowboard, Mega Ramp, Freebord, Shoe Goo, The Wave, Frank Nasworthy, Snakeboard, Vigorboard, MotoBoard, Skate shoes, Funbox, Electric skateboard, Larry Stevenson, Mini ramp, T-board, Vans Half Cab, Freeline skates, Grip tape, Stowboard, Two Seasons, Vert ramp, Old-School Board, Freeboard, Kicktail, Streetcarver, Brakeboard, Quarter pipe, Superpipe, Roller Derby Skateboard, Slalomboard, Grind rail, Skyhook, Skateplank. Excerpt: A fingerboard is a working replica of a skateboard that a person "rides" by replicating skateboarding maneuvers with their hand. The device itself is a scaled-down skateboard complete with moving wheels, graphics and trucks.the founder of finger boards was Cam Fox Bryant. Others that have been given credit to the improvements of the common fingerboard are Andrew Lenert Maffson, Cody Fegger as well as Timothy Puffet. A fingerboard is 96 millimeters long or longer, and can have a variety of widths like 26mm (regular), 28mm (wide), and 29mm and up (extra wide). There are the 57mm minis and the 96mm regular and the cruiser boards. Skateboarding tricks may be performed using fingers instead of feet. Most tricks done on a fingerboard are the same as people do on skateboards. Lance Mountain helped develop fingerboarding as a hobby in the late 1970s and wrote an article on how to make fingerboards in TransWorld's SKATEboarding magazine in 1985. Although fingerboarding was a novelty for years, they became a collectible toy as skateboard manufacturers realized the potential for product branding and profit starting in the 1990s. Fingerboards are now available as inexpensive novelty toys as well as high-end collectibles, complete with accessories one would find in use with standard-size skateboards. Fingerboards are also used by skateboarders as 3-D model visual aids to understand potential tricks and maneuvers; many users make videos to document their efforts. Similar to fingerboarding, handboarding is a scaled-down version of a skateboard that a user controls with their hands instead of just fingers, while finger snowboarding utilizes a miniature version of a snowboard. Fingerboards were first created as homemade toys in the 1970s and later became a novelty attached to key chains in skate shops (but were also mentioned as a model for a skateboard.) In the 1985 documentary "Future Primitive" a homemade fingerboard was ridden in a sink; some consider this the earliest fingerboa