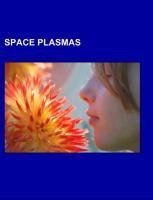 Source: Wikipedia. Pages: 133. Chapters: Sun, Supernova, Outer space, Lightning, Aurora (astronomy), Corona, Double layer (plasma), Energetic neutral atom, Plasma cosmology, Solar flare, Ionosphere, Heliosphere, Solar wind, High Frequency Active Auroral Research Program, Magnetosphere, Magnetohydrodynamics, Van Allen radiation belt, Birkeland current, Reionization, Coronal loop, Radio atmospheric, Plasma scaling, Upper-atmospheric lightning, Sprite (lightning), Magnetopause, Coronal seismology, Magnetosphere particle motion, Heliospheric current sheet, Shocks and discontinuities (magnetohydrodynamics), Sky brightness, Astrophysical plasma, Interplanetary medium, South Atlantic Anomaly, Plasmoid, Magnetosphere chronology, Wouthuysen-Field coupling, Solar transition region, Gunn-Peterson trough, Intracluster medium, Sudden ionospheric disturbance, Parker spiral, Aeronomy, Flux transfer event, Magnetic cloud, Plasmasphere, Cooling flow, Ring current, Sura Ionospheric Heating Facility, Strahl (astronomy), Magnetosheath, Plasma sheet, Atmospheric dynamo. Excerpt: The Sun is the star at the center of the Solar System. It is almost perfectly spherical and consists of hot plasma interwoven with magnetic fields. It has a diameter of about 1,392,684 km, about 109 times that of Earth, and its mass (about 210 kilograms, 330,000 times that of Earth) accounts for about 99.86% of the total mass of the Solar System. Chemically, about three quarters of the Sun's mass consists of hydrogen, while the rest is mostly helium. The remainder (1.69%, which nonetheless equals 5,628 times the mass of Earth) consists of heavier elements, including oxygen, carbon, neon and iron, among others. The Sun formed about 4.6 billion years ago from the gravitational collapse of a region within a large molecular cloud. Most of the matter gathered in the center, while the rest flattened into an orbiting disk that would become the Solar System. The central mass became increasingly hot and dense, eventually initiating thermonuclear fusion in its core. It is thought that almost all other stars form by this process. The Sun's stellar classification, based on spectral class, is a G-type main-sequence star (G2V), and is informally designated as a yellow dwarf, because its visible radiation is most intense in the yellow-green portion of the spectrum and although its color is white, from the surface of the Earth it may appear yellow because of atmospheric scattering of blue light. In the spectral class label, G2 indicates its surface temperature of approximately 5778 K (5505 °C), and V indicates that the Sun, like most stars, is a main-sequence star, and thus generates its energy by nuclear fusion of hydrogen nuclei into helium. In its core, the Sun fuses 620 million metric tons of hydrogen each second. Once regarded by astronomers as a small and relatively insignificant star, the Sun is now thought to be brighter than about 85% of the stars in the Milky Way galaxy, most of which are red dwarfs. The absolute magnitude of the Sun is +4.83; however, as the star closest