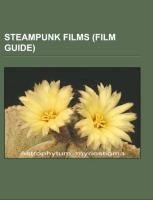 Source: Wikipedia. Commentary (films not included). Pages: 91. Chapters: Castle in the Sky, Time After Time, The Golden Compass, Hellboy II: The Golden Army, The Prestige, Lemony Snicket's A Series of Unfortunate Events, Fullmetal Alchemist the Movie: Conqueror of Shamballa, Atlantis: The Lost Empire, Stardust, Jonah Hex, Wild Wild West, Howl's Moving Castle, The League of Extraordinary Gentlemen, Steamboy, Young Sherlock Holmes, The Time Machine, Return to Oz, Frankenstein, Perfect Creature, The Mysterious Geographic Explorations of Jasper Morello, Van Helsing, Around the World in 80 Days, Kin-dza-dza!, Journey to the Center of the Earth, A Trip to the Moon, Naruto the Movie 2: Legend of the Stone of Gelel, First Men in the Moon, Atlantis: Milo's Return, G.I. Samurai, Biggles: Adventures in Time, Mutant Chronicles, The Infinite Worlds of H. G. Wells, Vidocq, The City of Lost Children, From the Earth to the Moon, Mysterious Island, Van Helsing: The London Assignment, The Impossible Voyage, The Adventures of Mark Twain, Master of the World, Windaria, War-Gods of the Deep, The Fabulous World of Jules Verne, The First Men in the Moon, Conquest of the Pole. Excerpt: The Golden Compass is a 2007 fantasy-adventure film based on Northern Lights (published as The Golden Compass in the U.S.), the first novel in Philip Pullman's trilogy "His Dark Materials". The film was released on December 7, 2007 by New Line Cinema. Directed by Chris Weitz, it stars Dakota Blue Richards, Nicole Kidman, Daniel Craig, Eva Green, Sam Elliot, Ian McKellen, Ben Walker and Freddie Highmore. The project was announced in February 2002, following the success of recent adaptations of other fantasy epics, but troubles over the script and the selection of a director caused significant delays. At US$180 million, it was one of New Line's most expensive projects ever, and its middling success in the US contributed to New Line's February 2008 restructuring. The story centers around the adventures of Lyra Belacqua, an orphan living in a parallel universe on a world that looks much like our own. In Lyra's world, a dogmatic ruling power called the Magisterium is conspiring to end tolerance and free inquiry. Poor, orphan and Gyptian children are disappearing at the hands of a group the kids call the Gobblers. Lyra discovers that Mrs. Coulter is running the Gobblers. Rescued by the Gyptians, Lyra joins them on a trip to the far north in search of the missing children. Before its release, the film received criticism from secularist organisations and fans of His Dark Materials for the dilution of the religious elements from the novels, as well as from some religious organisations for the source material's anti-Catholic and atheistic themes. The studio ordered significant changes late in post-production, which Weitz later called a "terrible" experience. Although the film's visual effects (which Weitz has called the film's "most successful element") won both an Academy Award and a BAFTA, critical reception was mixed. The film is set in a world where a person's soul resides outside their body in an animal-like form called a Dæmon. A dictator-like organization called the Ma