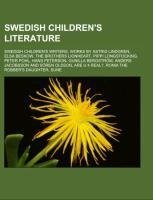 Source: Wikipedia. Pages: 28. Chapters: Swedish children's writers, Works by Astrid Lindgren, Elsa Beskow, The Brothers Lionheart, Pippi Longstocking, Peter Pohl, Hans Peterson, Gunilla Bergström, Anders Jacobsson and Sören Olsson, Are U 4 Real?, Ronia the Robber's Daughter, Sune, Emil i Lönneberga, Gösta Knutsson, Agaton Sax, Pettson and Findus, Thomas Funck, Mio, My Son, Marita Lindquist, Karlsson-on-the-Roof, Vicke Viking, Helena Nyblom, Sven Nordqvist, Katarina Mazetti, Helena Pielichaty, Bill Bergson, Laura Trenter, Rizah Sheqiri, The Six Bullerby Children, Jan-Olof Ekholm, Madicken, Snipp Snapp and Snurr, Maria Gripe, Pomperipossa in Monismania, Most Beloved Sister, Ingelin Angerborn, Bertil Almqvist, Tam Sventon, Ester Ringnér-Lundgren, Nils Egerbrandt, Pappa polis, Helena Dahlbäck, Sia lives on Kilimanjaro, Kajsa Kavat, Lille Katt. Excerpt: The Brothers Lionheart (Swedish: ) is a children's fantasy novel written by Astrid Lindgren. It was published in the fall of 1973 and has been translated into 46 languages. Many of its themes are unusually dark and heavy for the children's book genre. Disease, death, tyranny, betrayal and rebellion are some of the dark themes that permeate the story. The lighter themes of the book involve platonic love, loyalty, hope, courage and pacifism. The two main characters are two brothers; the older Jonatan and the younger Karl. The two brothers' surname was originally Lion, but they are generally known as Lionheart. Karl's nickname is Skorpan (Rusky) since Jonatan likes these typical Swedish toasts or crusts. In Nangijala, a land in "the campfires and storytelling days", the brothers experience adventures. Together with a resistance group they lead the struggle against the evil Tengil, who rules with the aid of the fearsome fire-breathing dragon Katla. 9 year old Karl Lejon is chronically ill and has found out he is going to die. His adored big brother, 13 year old Jonatan, calms him down and starts telling him about life after death. In the afterlife, all men will go to a land on the other side of the stars, known as Nangijala, where they're still in "the campfires and storytelling times". But Karl is not happy; it could still be over 90 years until Jonatan joins him there. Jonatan assures Karl that time is different in Nangijala and that 90 years will only feel like a few days to Karl. Some time later a fire spreads throughout their home. Jonatan rescues his little brother by carrying him on his back and jumping out the window, but is fatally injured in the fall. Karl is left alone, and starts to wonder if the story about Nangijala is really true. A white pigeon appears one night on his window sill, and Karl interprets it as a confirmation that it is. Two months after his brother Jonatan, Karl dies of his illness. Right before he dies, he leaves a message for his mother: