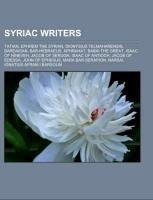 Source: Wikipedia. Pages: 27. Chapters: Tatian, Ephrem the Syrian, Dionysius Telmaharensis, Bardaisan, Bar-Hebraeus, Aphrahat, Babai the Great, Isaac of Nineveh, Jacob of Serugh, Isaac of Antioch, Jacob of Edessa, John of Ephesus, Mara Bar-Serapion, Narsai, Ignatius Afram I Barsoum, John bar Penkaye, Philoxenus of Mabbug, Ignatius Ya`qub III, Joshua the Stylite, Toma bar Yacoub, Sergius of Reshaina, Theodore Bar Konai, Mar Emmanuel Yosip, Jacob Bar-Salibi, John of the Sedre, The Scattered Pearls. Excerpt: Ephrem the Syrian (Aramaic / Syriac: , ; Greek: ; Latin: ; ca. 306 - 373) was a Syriac and a prolific Syriac-language hymnographer and theologian of the 4th century. He is venerated by Christians throughout the world, and especially in the Syriac Orthodox Church, as a saint. Ephrem wrote a wide variety of hymns, poems, and sermons in verse, as well as prose biblical exegesis. These were works of practical theology for the edification of the church in troubled times. So popular were his works, that, for centuries after his death, Christian authors wrote hundreds of pseudepigraphous works in his name. Ephrem's works witness to an early form of Christianity in which western ideas take little part. He has been called the most significant of all of the fathers of the Syriac-speaking church tradition. Ephrem was born around the year 306 in the city of Nisibis (the modern Turkish town of Nusaybin, on the border with Syria, which had come into Roman hands only in 298). Internal evidence from Ephrem's hymnody suggests that both his parents were part of the growing Christian community in the city, although later hagiographers wrote that his father was a pagan priest. Numerous languages were spoken in the Nisibis of Ephrem's day, mostly dialects of Aramaic. The Christian community used the Syriac dialect. The culture included pagan religions, Judaism and early Christian sects. Jacob, the second bishop of Nisibis, was appointed in 308, and Ephrem grew up under his leadership of the community. Jacob of Nisibis is recorded as a signatory at the First Council of Nicea in 325. Ephrem was baptized as a youth, and almost certainly became a son of the covenant, an unusual form of Syrian proto-monasticism. Jacob appointed Ephrem as a teacher (Syriac , a title that still carries great respect for Syriac Christians). He was ordained as a deacon either at his baptism or later. He began to compose hymns and write biblical commentaries as part of his educational office. In his hymns, he som