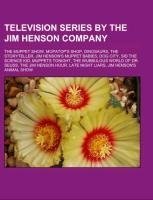 Source: Wikipedia. Pages: 47. Chapters: The Muppet Show, Mopatop's Shop, Dinosaurs, The Storyteller, Jim Henson's Muppet Babies, Dog City, Sid the Science Kid, Muppets Tonight, The Wubbulous World of Dr. Seuss, The Jim Henson Hour, Late Night Liars, Jim Henson's Animal Show, Aliens in the Family, CityKids, The Hoobs, Secret Life of Toys, Sam and Friends, Construction Site, Animal Jam. Excerpt: The Muppet Show is a television program produced by American puppeteer Jim Henson and featuring Muppets. After two pilot episodes, in 1974 and 1975, the show ran for five seasons beginning in 1976. The series shows a vaudeville- or music hall-style song-and-dance variety show, as well as glimpses behind the scenes of such a show. Kermit the Frog stars as a showrunner who tries to keep control of the antics of the other Muppet characters (and his temper), as well as keep the guest stars happy. The show was known for outrageous physical slapstick, sometimes absurdist comedy, and humorous parodies. Each episode also featured a human guest star. As the programme became popular, many celebrities were eager to perform with the Muppets on television and in film: by the end of its run over one hundred guest stars had appeared. Many of the puppeteers also worked on Sesame Street. Muppet performers over the course of the show include Henson, Frank Oz, Jerry Nelson, Richard Hunt, Dave Goelz, Steve Whitmire, Louise Gold, Kathryn Mullen, Karen Prell, Brian Muehl, Eren Ozker, and John Lovelady. Jerry Juhl and Jack Burns were two of the show writers. Since 1969, Sesame Street had given Jim Henson's Muppet creations exposure; however, Henson began to perceive that he was pigeonholed as a children's entertainer. He sought to create a program that could be enjoyed by young and old. Two specials were produced and aired that are considered pilots for The Muppet Show. Neither led to the sale of a prime-time network series. However, the prime-time access rule had just been enacted, which took the 7:30 to 8pm ET slot from the networks and turned it over to their affiliates. CBS suggested it would be interested in Henson's proposal as a syndicated series it could purchase for its owned-and-operated stations, to run one night a week in that time slot. Lew Grade, head of the British commercial station ATV, offered a deal to Henson that would see his show produced at the ATV studios in Elstre