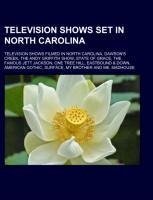 Source: Wikipedia. Pages: 25. Chapters: Television shows filmed in North Carolina, Dawson's Creek, The Andy Griffith Show, State of Grace, The Famous Jett Jackson, One Tree Hill, Eastbound & Down, American Gothic, Surface, My Brother and Me, MadHouse. Excerpt: One Tree Hill is an American teen, young adult television drama created by Mark Schwahn, which premiered on September 23, 2003 on The WB Television Network. After its third season, The WB merged with UPN to form The CW Television Network, and since September 27, 2006 the network is the official broadcaster for the show in the USA. The show is set in fictional town Tree Hill in North Carolina and originally follows the lives of two half-brothers, Lucas Scott (Chad Michael Murray) and Nathan Scott (James Lafferty). Their relationship evolves from heartless enemies to caring brothers, and the basketball drama, as well as the brothers' on-again/off-again romances with female characters, are significant elements within the series. The first four seasons of the show focus on the main characters' high school years. With the beginning of the fifth season, Schwahn decided to skip the timeline four years ahead, showing their lives after college. In the seventh season, he adjusted the timeline fourteen months into the future after the sixth season. The opening credits were originally intertwined with the song "I Don't Want to Be" by Gavin DeGraw playing in the background. The theme was removed from the opening in the fifth season; Schwahn said the decision was made to lower production costs, add more time for the storyline, and because he felt that the song was more representative of the main characters' adolescent past, not their present maturity. The credits then only consisted of the title written on a black background. The theme was restored for Season 8, due to audience demand, and is sung by different artists each week. The series' second season was the highest rated in the series, averaging 4.3 million viewers weekly and a 1.9 Adults 18-49 rating. It has also won Teen Choice Awards. On May 12, 2009, it was confirmed that Murray and Hilarie Burton declined to return for the seventh season, although stories on what transpired vary. Their characters (Lucas and Peyton) had